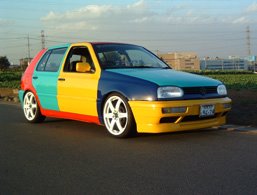 Who didn't love the Harlequin Golf when it came out? It was like the Swatch watch of automobiles. Each Harlequin was a random assemblage of colors to create a goofball color combination that was unlike any of the few other super rare Harlequins. Under 500 made, this was a car developed by Volkswagen when they are at the absolute peak of their game. I still think Rabbits and 16v Sciroccos look menacing with all the sharp edges. And those 70s sharp edges were certainly prescient of the look to come. Flea, of the Chili Peppers, had a Mercedes 500 SEL that was painted very much like a Harlequin Golf and every once in awhile I still see it driving around LA although it is owned by somebody else now. Anybody have a photo of the Flea Mercedes? 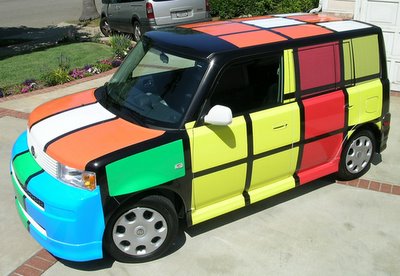 I have been spending lots of time investigating vehicle wrapping as I am working on an article for a special Make magazine issue. Not surprisingly, it is a complicated endeavor to wrap flat sheets around compound curves with a heat gun. I found this superb Rubik Scion on the Ambient Graphics site. Appears to be a 6x3 'cube', so there is some poetic license taken but, what the hey, it's not like you are going to solve an xB. Coop told me the xB is due for a redesign which is a real shame because everytime I see an xB I still smile. These were designed by people who played with Legos for people who played with Legos.


Any Hooptyriders work/own a large format printing and vehicle wrap shop in Los Angeles? Want a co-writing credit for a super cool Make article? Email me pronto fast.
Posted by Mister Jalopy at 11:23 AM