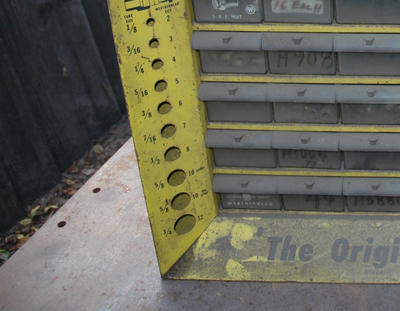 Everybody is asking, don't you already have tiny drawers full of miscellany? Why consider the Dorman when Hooptyrides cabinets are already overflowing with ten lifetimes of tiny parts? I paid about $6 for this cabinet last weekend and it is packed full of Weatherhead brass tubing components - nearly assuring I will have everything except what I actually need. 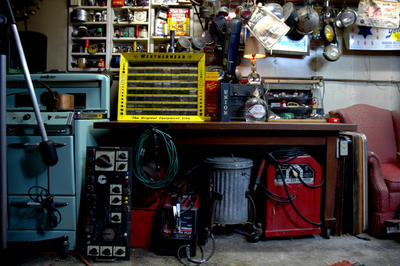 After sorting and cleaning, the garage required an hour's worth of re-organization to find a new home for the bumblebee cabinet. How many workbenches would be enough? A hundred seems reasonable.
Posted by Mister Jalopy at 8:34 AM 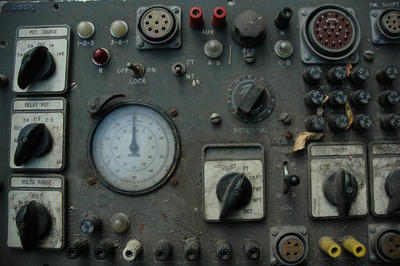 In the absence of better information, I will assume this $10 garage sale control panel is from an intergalactic spacecraft. 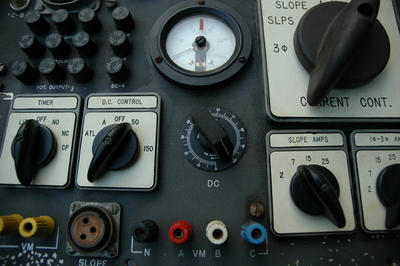 Sure cleans up nice.
Posted by Mister Jalopy at 8:07 AM 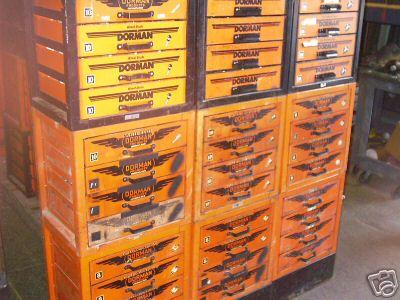 Everybody has lottery dreams of what they would do with boundless riches and I am no different. I have long held that the ultimate luxury would be to have an entire Dorman nut, bolt, fastener, washer, cotter pin, battery hold down, wingnut, moulding clip, wheel stud, brake clip, hydraulic fitting, starter bolt, oil drain plug and grease fitting display at your private shop. The absolute time suck of any project is having to runout to pick-up some absolutely necessary, 35 cent what-have-you that you could never have forseen needing. The key to real progress is never leaving the shop. The chances of disappointment and aggravation sky rocket as soon as you leave your property lines.

As is often the case with adventures of boundless folly, the purchase price of this absolute jewel is but a shred of total cost of ownership. But everything about this drives me insane with desire! 9 cabinets! With 3 bases! What you see here is a THIRD of the total cabinets! Admittedly, I am in a Halloween sort of mood, but, hubba hubba, that orange and black looks so great I would be tempted to have them in the living room.

Transport from Corpus Christi to Los Angeles would quickly eclipse the reasonable asking price. The auctioneer recommends emptying the cabinets to reduce weight, but refilling them upon arrival would cost six modest fortunes. If anybody is driving a large truck from Corpus Christi this week, please bring this to me. We will eat club sandwiches and drink frosty rootbeer at a card table within a Dorman cabinet constructed U.
Posted by Mister Jalopy at 8:40 AM 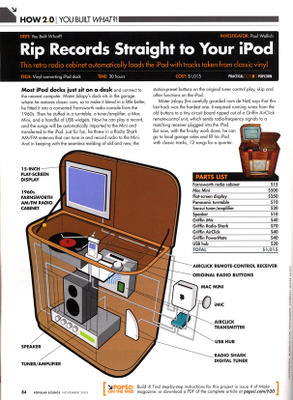 (Nov 05) did a super job of summarizing the giant ipod in a single page. The illustration makes it look so delicious that I want to build another one. Though, I must admit, I wish they didn't run up the tally as I was thinking it cost me about $20.

If you want the real meat AND THE POTATOES check out the full article in Make Vol. 4

. The hair raising soldering of the wires to the Airclick alone is enough to justify the luxurious Make mook price.
Posted by Mister Jalopy at 3:25 PM

Hang Any Damn Thing on the Wall 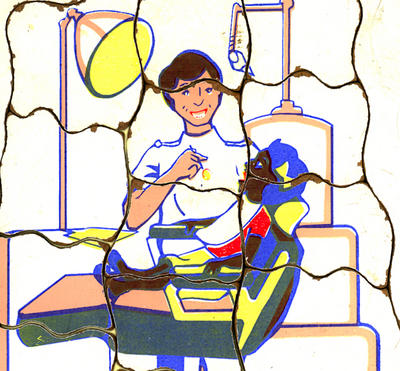 The optimism of the post-war years and Apollo space program disintegrated in the 60s. Gone were the days when kids could be president or an astronaut and it was replaced with the weird, diminished expectations of "You could be a dentist! At best." Or a barber! Or worse. A TV repairman! 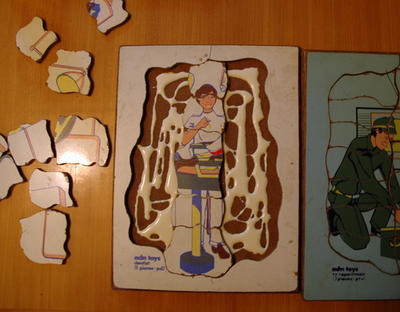 What rainy day is truly soaked without a project requiring Elmer's glue? 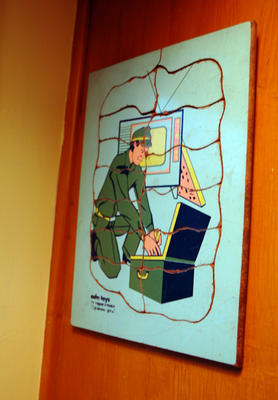 Sparing future generations the disappointment of assembling puzzles that represent careers that have gone the way of the Dodo bird, I decided to glue the puzzles together and hang the TV repairman on the wall. Perhaps future generations will get to build puzzles of robots or fire engines.

I don't have space for the dentist working on the mutant or the, not pictured, Proud Barber. Those two are available for immediate purchase or trade.
Posted by Mister Jalopy at 6:33 PM 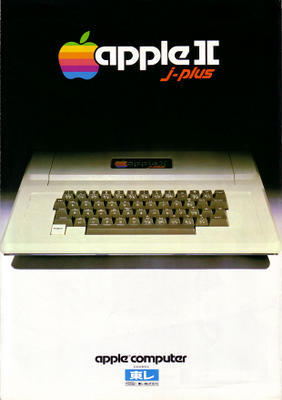 It is difficult for me to overstate the importance of the Apple II. I still remember the smell of unwrapping my Apple II. The disk boot command (PR#6) is burned into my brain with greater clarity than my social security number. As if it was in my hands right now, I know the exact weight and shape of a Hayes Microcoupler. My GBBS bulletin board had all the K-K00l M0dz. And even though I was only 14, my friends and peers were rocket scientists, lawyers and college professors.

Before my Apple II, I had a TI 99/4a and then an Atari 400 and although the specs were impressive, they didn't inspire like the open architecture of the Apple II. The Atari had sprite graphics and four joystick ports, but BASIC came on a cartridge. And the TI was a 16-bit machine, but it was screwed shut and if you wanted an interface bus, you had to buy an external box. Apple did it all first and Atari still didn't get it. TI was even worse. 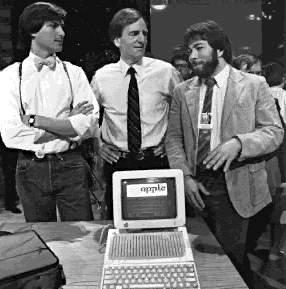 Woz got it. Thirty seconds after unwrapping an Apple II, you were opening the lid and connecting ribbon cables. It was respect. Apple extended respect. And Apple was respected by my rocket scientist buddies and myself. Apple extended the respect through meaningful manuals, a documented architecture and a generally awesome computer. Nothing was hidden. You could POKE and PEEK your way through the whole machine.

The Apple II became a platform for invention. A modem in every slot to create the first online chat? Music keyboard controllers years before MIDI? Digitizing audio through the cassette input jacks? Controlling teletypes through the joystick ports? Big Traks and Armatrons connected as $30 robots? The Apple II was the hub of lots of cool homebrew technology. The first time I heard Van Halen's "Ain't Talkin' About Love" was through a tiny Apple II speaker. All 15 scratchy seconds of it. Where'd I get it? I downloaded it from a bulletin board.

It was the mad scientist's computer. And it profoundly changed the way I viewed the world. A more complex, richer life. And that all-night hacking lead me to a very successful career. One that would still be paying me handsomely if I hadn't thrown it in the trash bin. The Apple II was the best investment that could have made.

When Jobs asked Scully to leave Pepsi and come to Apple, he said, "Do you want to keep selling sugar water or change the world?"

Now I ask, "Do you want to keep selling DRM'd Desperate Housewives episodes or change the world?"

Powerless Against the Appeal of Odd Hammers 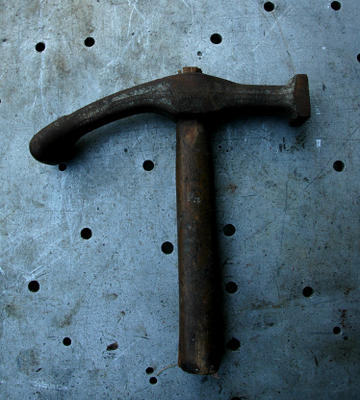 "I bet I would never use that hammer in my entire life," I replied. He then reduced the price to $1. Though I am a ruthless negotiator, I was not dickering over price. I was just stating that the whole hammer truth. Perhaps one day I will need to hammer around a corner and won't I be happy to have it!
Posted by Mister Jalopy at 5:11 PM 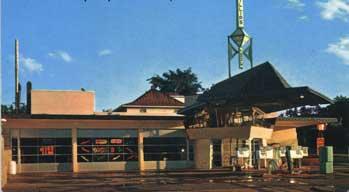 Who knew there was a Frank Lloyd Wright gas station? I have been doing a bunch of online research (codename for wasting time) about streamline moderne, pre-fab, porcelain-enameled, steel gas station buildings and have learned almost nothing about them. But found lots of other cool gas stations. Frank Lloyd Wright's only gas station had glass skylights over the service bays - sensible by any standard - and a second story glass observation deck, which, is perhaps, only sensible to me. 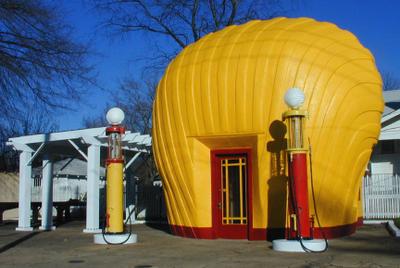 I had read about this concrete Shell station ages ago in Preservation magazine as a North Carolina preservation what-have-you organization was trying to restore it as an office. Looks like a giant piece of candy corn. It's so appealing, you just want to touch it. Of the original eight built, this is the last one standing. Can you imagine being the ninny that decided to tear one down? Why tear it down? It is so small you can practically fit it in your pocket. 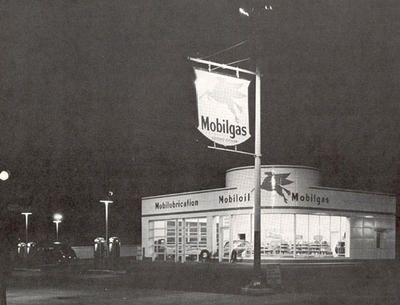 The modular streamline moderne stations are the best. Incredible style in a completely customizable package. Though I have been looking all over the place, I have not found detailed construction info. For example, was the framing steel? How did the panels attach? How did it arrive? Was it a complete kit like a Sears house? All the hooey about pre-fab construction and I have yet to see anything in Dwell that looks as completely insanely great as this. (Link) 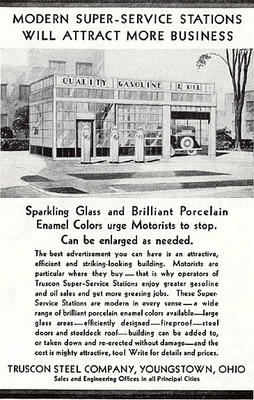 That is certainly a compelling case. Youngstown, I am sure not by coincedence, was also home to the Youngstown kitchen cabinets. "Taken down and re-erected without damage" Uh huh. That is the key. There is a closed down gas station in Los Angeles constructed in this Philip Johnson Glass House International-by-way-of-Ohio style. I have spoken with the owner as there is a perpetual For Lease sign. His great hope is to ground lease the location to El Pollo Loco. Every so often, I stop by and say hello, each time pointing out that I want the building if his tear down dreams come true. He looks at me like I am crazy and sort of says that he will call me. I hope he does and hope he doesn't.
Posted by Mister Jalopy at 7:54 PM

The Not Subtle Look of Dragsters 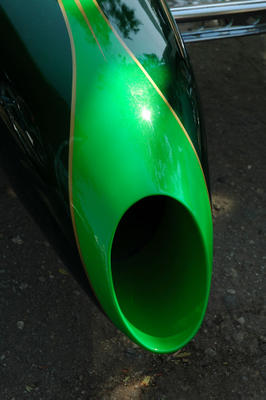 A day at the Hot Rod Reunion is enough to make you consider selling all your worldly possessions and moving into a shotgun shack in outer San Berdoo. A one room, clapboard side house with a black and white TV, a round top refrigerator filled with biscuits, jam and Budweiser, a sagging sofa, a pedestal fan, a wood grain formica dinette with a single chair, jelly jar drinking glasses and NHRA membership. Because, if you had a top fuel, front engine rail in your garage, what else would matter? 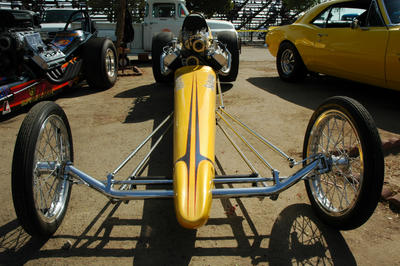 If you decided to build the most obscene, impractical, unbalanced, vulgar automobile imaginable, it would not look much different than this. 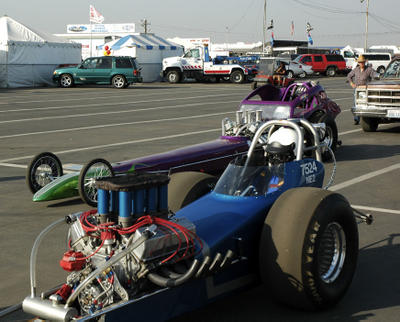 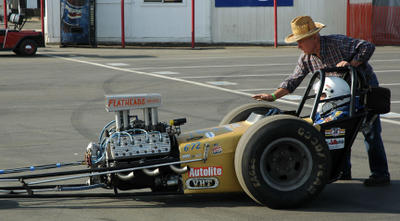 Think these guys might be having a nice time? 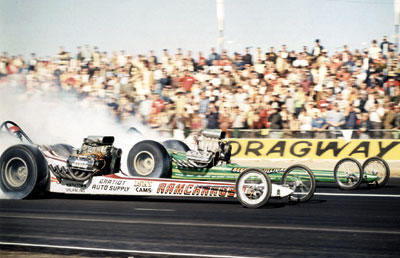 (photo from Beebe-Mulligan.com)
How do they work? Pretty well, actually. The profound compromises made in the name of speed are enough to give you an upset stomach. Imagine what it would be like in the driver's seat. 1000 horsepower of supercharged nitromethane powered engine just itching to explode and end up in the cockpit with you. As if the visibility of looking over the engine was not enough, the headers are swooped back at an angle to blow off some of the tire smoke. How's that look to be working on the dragster in the far lane?

Instead of shocks and springs, the only suspension dampening is the natural flex of the chrome moly tube frame. And the motorcycle wheels and tires seem like a mile away. 250 mph and no brakes, but you get a little parachute that will open most of the time.

As if that is all not scary enough, consider where the differential is... 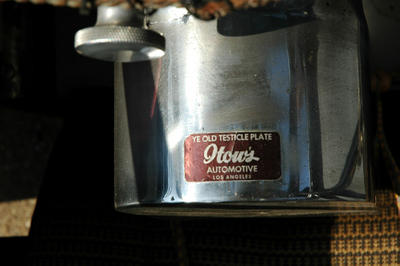 One can only imagine the incidents that lead to the manufacture of this primo piece of vintage speed equipment. I would be Googling 'testicle plate' right now, if I wasn't so apprehensive of what I might find.
Posted by Mister Jalopy at 11:35 AM