There is great nobility in the small car and a lot to love about a modest automobile that is a capable performer, knows its place in the world and does small car things small car well. As the air cooled Volkswagens proved a generation ago, the honest compact can stand on its own merits and doesn't have to be pretend to be something it's not.

While I was largely disappointed by the compact cars at the last Los Angeles Auto Show, I was quite taken by the Dodge Caliber. Comparatively, it really seemed to be a car of integrity, both in construction and design. For example, the uninspiring Toyota Yaris has power windows while the bottom-of-the-barrel Caliber has manual crank up windows. All things being equal, one look at the Yaris' more feature-rich window sticker and it would seem to best the Caliber, but the Caliber feels like a better car. It seems that the Dodge budget for power windows went into building quality instead. Of course, I don't have their respective balance sheets in front of me, but the Caliber earned my respect with its quality feel and materials.

A four-door hatchback, the Dodge Caliber is a champion of utility. The cubic foot cargo specs lie, as any hatchback owner can attest to the extraordinary volumes that present themselves when necessary. Without the limits of a sedan, the hatchback lets you think in terms of a world without barriers. Recline the passenger seat and you are able to carry 8 foot 2" x 4"s, one end wrapped in an old t-shirt and resting on the dash while the other end sticks out the hatch with an attached Twix wrapper serving as a red warning flag. Add a 6' Noble Fir Christmas tree, two flats of pansies, two bags of Quikcrete, a case of Tecate, a large pizza, two cans of Ajax and a new water-saving toilet to really appreciate the black hole qualities of the hatchback. Believe me, your passenger won't mind sitting in the back seat one bit. What with the pine smell and the limo service, they will feel like a Kennedy on the way to Hyannisport.

So, if there is nobility in a small car of restraint, what if that piety is thrown out the window and a monster is born? The Renault Turbo R5 breathed fire into the lowly LeCar and transformed it into a true classic of the 1980's - a decade in which few classics emerged. And consider the VW GTI, which practically invented the hot hatchback. What are these bastardizations of economic restraint when they crash head on with turbo chargers and giant disc brakes? Hopefully, examples of exquisite balance in the form of extreme performance driving onto freeway entrance ramps, downtown lane splitting, and abandoned business park skid pad practice.

As I already respected the Caliber, I was thrilled to learn that Dodge SRT is shopping the parts bins and building a little beast of a hatchback... A turbo charged aluminum 4 with cast iron cylinder sleeves and tiny oil squirters to keep the pistons from melting. Big brakes and half shafts off a full size Dodge. Functional cold air scoops at the front bumper and ducts to cool the brakes. All the typical racecar treatments that you would add if you were going racing, like improved intake air flow, higher compression, bigger injectors, higher volume fuel pump and an external oil cooler.

The hood scoops gave me pause since they seemed to be non-functional geegaws, but they are open and used to exchange air to keep the under hood temperatures lower. The interior is a little tarted up for my taste, but I love the aftermarket boost gauge and dash gizmos that report 0-60, 1/4 mile time, braking distance and g-force.

This would really speed up garage saling!

Posted by Mister Jalopy at 4:26 PM

Though I am not a collector with comprehensive historical knowledge, I do love to compare tools of different eras and manufacturers to see how individuals have engineered solutions to common problems - how to turn a bolt, how to cut a wire.

For 6 hours, the guys from Factory Gear cleaned, photographed, documented and considered hand tools that I forgot I even own. As the Factory Gear editor is also the owner of Deen Tools, it was not surprising that he and his crew were deeply knowledgeable about the engineering and manufacture of hand tools. They pointed out tiny details in construction that made one better than another - details I had never noticed on tools that I use daily.

To say that I wonder what the article says would be to greatly understate my intense curiosity.
Posted by Mister Jalopy at 4:03 PM 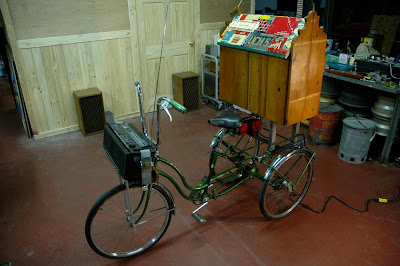 For Canadian readers, I will be on Discovery Channel Canada's Daily Planet tomorrow to discuss the Urban Guerrilla Drive-In Movie House - the home brew movie projector that I built. Hopefully, some enterprising ne'er-do-well will figure out how to put it on the internets, as the site/channel is not viewable from the rest of world.

Want to see the Urban Guerrilla in person? Come to Maker Faire, the most inspiring weekend of the year. 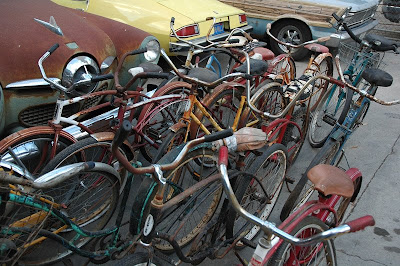 At the right price, it would seem so.
Posted by Mister Jalopy at 5:02 PM


After posting about the Faurecia concept car on Dinosaurs and Robots, I can not help but to think about the Nash Ambassador that spent some time at Hooptyrides, Inc. Mercifully, it has returned to whence it came.

In the early 1950's, the independent American automakers were having an extremely difficult time competing with the Big Three. Following the rationing of materials during the World War II, the big auto companies locked up the supply chain of steel and rubber so that the minor players were not able to meet customer demand. When raw materials were once again available, the independent automakers responded with outrageous design to distinguish themselves from the mainline automakers.

Nash engaged the legendary Italian design firm, Pininfarina, to design a luxury automobile. To save development costs, Nash fitted the Ambassador with a powerful, modern Packard V8 engine. In theory, it seems like a good idea. Without fax machines or email, Nash executives tried to explain to Italian sports car designers what an American luxury car should be. As evidenced by the photos above, the collaboration was not a success. Through mergers and dilution, Nash eventually became American Motors, but 1957 was the last new model year for the Nash marquee.

Like Paris Hilton or McMansions, the Nash Ambassador is an easy target. During a visit to Hooptyrides, Gale Banks declared it the ugliest car he had ever seen. He is not wrong, but the longer the Ambassador sat in my back yard, the more I began to appreciate it.

Boldness - It has a lot of look.

Comprehensive - Every single element of the car was designed. From the hood ornament to the gas cap, nothing was left to chance or considered to minor to escape the Italians. If nothing else, Nash certainly got their money's worth.

Complexity - Check out those front fenders and the grill. The sheet metal has more folds and curves than the Sydney Opera House. Complex, yes. Elegant, graceful? No.

Condition and Originality - Not a function of design, the car was completely original right down to the pink leather and silver brocade interior

Checking the Pininfarina 1950's timeline, the Alfa Romeo Giulietta Spider and Ferrari 250 are mentioned but somehow the Nash Ambassador has slipped through the cracks.
Posted by Mister Jalopy at 8:50 AM

Email ThisBlogThis!Share to TwitterShare to FacebookShare to Pinterest
Labels: cars 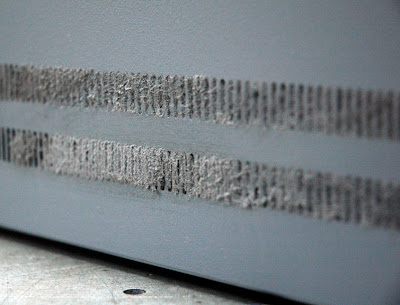 Realizing a laundromat is an extreme environment, I was still mighty impressed by the accumulation of dust and lint in my security DVR. No wonder the hard drive failed! 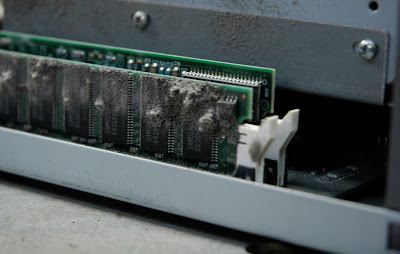 Posted by Mister Jalopy at 4:01 PM