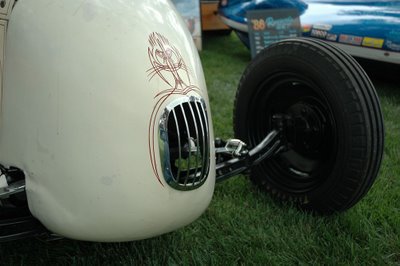 Von Dutch striping on a recently exhumed original hotrod that has not seen the light of day since 1960. I suppose people have all sorts of opinions about Von Dutch's artistic merits, but the reason the fella's work makes sense to me is the striping has so much damn personality. The comically small grill is quite endearing. Looks like it was stolen off a Stewart-Warner Southwind or perhaps a wall heater out of a bathroom at The Plaza Hotel. 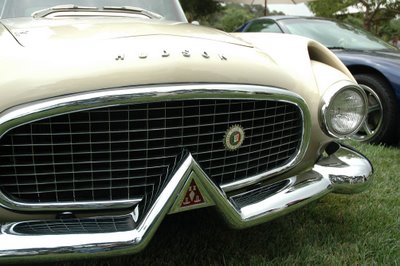 Please take a moment to consider the work involved to create that bumper. Then, to really feel like a lazy sod, reflect on the skill and man-hours required to build this entire Italian custom aluminum bodied Hudson. Multiply that times six, as that is how many Hudson commissioned before bankruptcy. 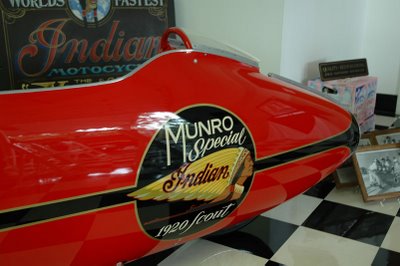 Hubba hubba. If you have not seen The World's Fastest Indian, please do yourself a favor and see it immediately. It was exhilarating to see this motorcycle in person. 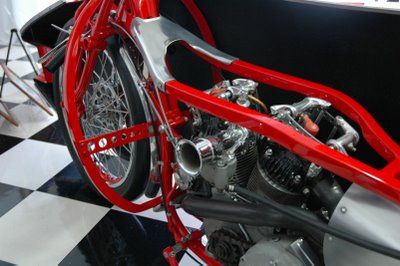 Somehow, I suspect this motorcycle never looked this good while under the ownership of Burt Munro. 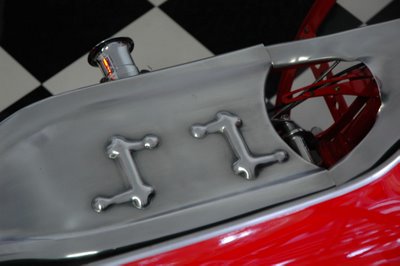 Think you have made concessions to speed before? Burt was able to sit 3/8" lower because of these rocker arm divots. I am not even particularly interested in motorcycles, but I spent half an hour looking at this amazing machine and kept finding trick shit like this. I don't know that I have seen a greater accomplisment by a single person. 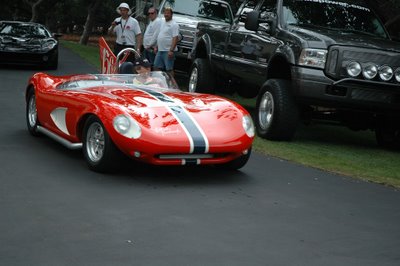 This photograph can not capture the sound of this beast. 300 people's arm hairs were raised when this Bonneville screamer was driven in. 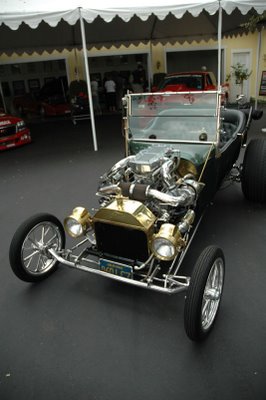 Great humorists and car designers generally do not intersect. All too often, customs and hot rods take themselves pretty seriously. Overly sinister, overly historic, overly self-aware. I was a kid in the 70's reading CarToons and these t-buckets just make sense to me. The Model T windshield, the fussy brass radiator, the Moto-meter style cap, the chrome tube axle, the button tufted leather interior and those ridiculous brass age headlight buckets. But take a closer look... That blue/gold California plate? It's a painted radiator cooler! And that unbelievable, twisted dual turbo monster engine! With no front brakes! Are those wire wheels on the front? Or CHROMED AMERICAN RACING 12 SPOKE SPINDLE MOUNTS? Sweet Jesus!

The T-Bucket was my favorite car at the Gearhead Invitational. 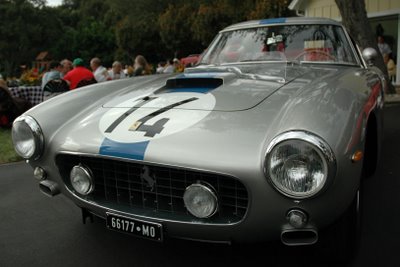 What can you say? The 12 cylinder Ferrari that won Lemans and Monza. Perfectly beautiful with subtle, artful features like those front brake cooling ducts that tell the secret about the monster under this elegant exterior. Absolutely breathtaking to see. But, it isn't a dual turbo T-bucket! 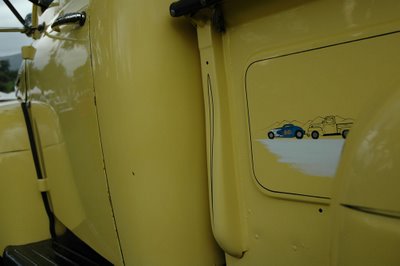 I'm always a sucker for a self-referential, recursive car mural. 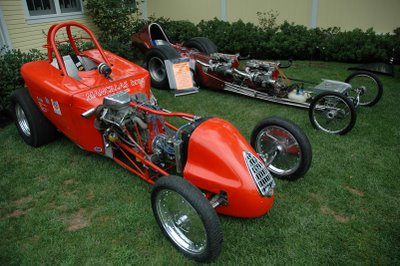 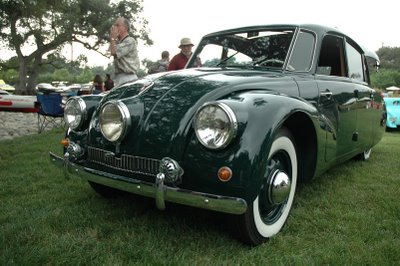 Too weird to be French? Is that possible? Is anything weirder than French? Czech Tatra! Czech is weirder! Definitely weirder. Wonderfully so. Check out those cool artillery style wheels! And the pair of horns, as a single horn would look, well, too weird I guess. And the three panel Dymaxion style windshield. Unfortunately, I didn't get a pic of the engine compartment as it does not disappoint on the weird meter. Air cooled V-8 with more chrome geegaws than a JC Whitney catalog. The longer I looked at it, the more I was sucked in by this charmer, with discoveries like the little pump oilcan holder in the engine compartment. Or the threaded bosses on the firewall to hold spare spark plugs. It sure seems like a cool idea to bolt to the firewall a chunk of aluminum with eight threaded holes to hold a set of hotter plugs. I might do just that.

When you go to a car show, the fellas are often guarded and kinda assholey. They act as if their precious speed secrets will seep out their ears if they are too friendly. Not the case at the Gearhead Invitational. Everybody, EVERYBODY, was extremely gracious and generous with their knowledge and time. It was a delight to talk to so many crazed individuals.

At the first and most obvious level, it was a supreme honor to be at such an event. It was an absolutely immaculate party where Emily Post would have seemed like a savage. Of course I knew of Gale Banks, as I watch the Banks Power diesel innovations pretty closely. I have been driving diesels for 20 years and am an unapologetic black smoke advocate. Given a chance, I will bore you to tears about diesel technology. If it were not for the copious, cheap and accessible early American oil fields, I am certain we would all be driving diesels on a variable hybrid of petro and plant oils as economics and environment demanded. For a couple years, I have been on the lookout for a first gen Camaro or a nice front engine rail to build into a soybean oil powered turbo diesel racecar. I have a set of Halibrand knock-off Indy wheels for a Trans-Am-style Camaro, festooned with 70's funny car prismatic gold-leaf livery, for my 'Deep Fried Greaseballs' racing team.
Then there was the exclusivity. This wasn't the Burbank Bob Hope Park with families out for a cheap afternoon to tell you about how they used to have a neighbor with a wagon like yours. Even I get a little assholey after hearing that for the 20th time. Unless somebody jumped the fence, you knew everybody present was at least as crazy about cars as you are.
Now, I am reasonably presentable, friendly, use please/thank you, and know where the trash can for empty beer bottles is, but this was an afternoon with everybody who ever appeared in Hot Rod or Rodder's Journal. I had dinner with the fellas who built the world's fastest flathead Ford, while I'm satisfied if I can get the Country Squire idling half decent with my $5 garage sale Holley carb. 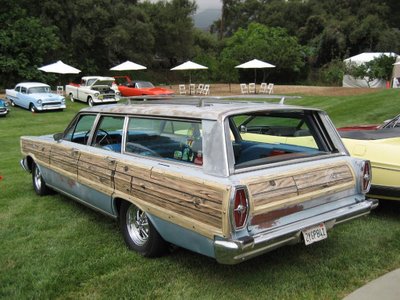 The Hooptyrides Ford Country Squire
Photo Credit: Coop and Ruth
Finally, there was the dimension of not deserving to be there that made it really sweet. Talk about getting away with something! The Hoopty Squire right out there on the lawn with the best of the best.

In true Hooptyrides style, I distinguished myself by having the cheapest automobile at the event. The Ford Country Squire was purchased at a garage sale for $700, and I had negotiated against a potential buyer who was offering $500, a bag of weed and a free apartment carpet cleaning. It is rare that I am the fellow with MORE money in an automobile purchase negotiation.

Mostly, it was profoundly inspiring - despite being humbling when you realize that, comparatively, you really don't know anything. It really made me want to get to work on my crackpot schemes.

Thank you, Gale and Vicki Banks. Thank you very much indeed.

(Want to see more photos? Coop and Iowahawk did a better job of documentation.)
Posted by Mister Jalopy at 9:15 PM