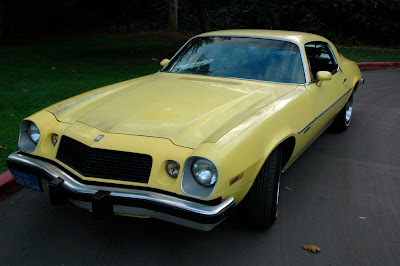 Ah, yes. The Camaro. One of the automobiles from the stable that has not elicited a single mention on Hooptyrides. Initially, I envisioned having this car for a mere month or two. Do a little work and flip it for a modest profit.

My intent was simple - I wanted the Camaro for the sole purpose of driving to Tommy's Hamburgers while listening to Van Halen. Then I discovered the 2 broken studs failing to secure the lowly, leaking 2 barrel carburetor - the cause of lackluster acceleration answered, as it sucked air, diluted the air to fuel ratio and bogged down. And that, my friends, is how little projects become big projects. The Camaro is done. Or, done-ish. Done as it is going to be. And it took a year.

I do believe I have finally learned my lesson: There are no quick projects. Right now I sit here before you, humbled by my lack of timely progress, and I commit to you, never again. Only heart and soul projects from here on out. I will leave the quick flips and modest profits to those who can actually extract those few dollars in reasonable time frames. 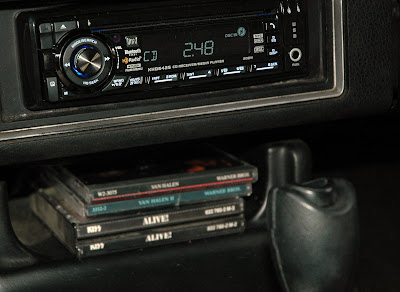 Since the time of this photo, I added an additional Van Halen album, Unchained. And, recognizing that not all passengers rock it at the same level as the more senior heshers in the Hooptyrides inner circle, I have also included Kiss Alive! for those preferring their metal more bar-band-make-up-wearing in nature. 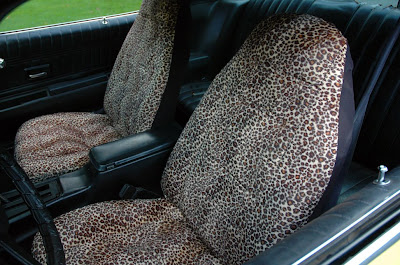 Purchased at the seat cover hut in the parking lot of the Echo Park Alta Dena dairy, the leopard skin seat covers were a completely satisfying upgrade. At a mere $40, the proprietor installed the covers for no additional charge. With the texture of a stuffed animal won at the carnival, the seat covers tend to pull themselves out of shape with every egress and ingress. No matter, I love them. As engaged readers have already noticed, I also added a lace-up, faux leather steering wheel cover. It sounds ridiculous, but it makes a tremendous difference. 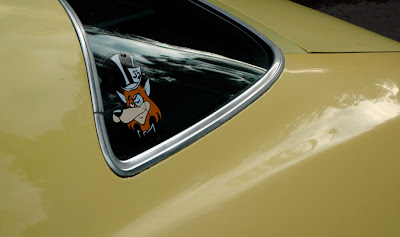 As you can see, the House 33 sticker really jazzes things up. When you start so low, modest improvements are palpable. 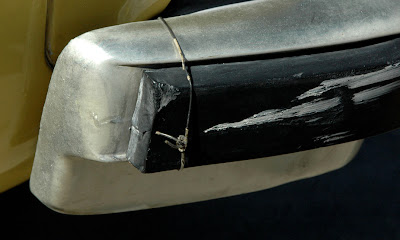 There are levels at which Hooptyrides addresses deferred maintenance issues. It is a complicated matrix of variables which includes cost, availability of parts, seriousness of aesthetic detriment, safety concerns, time required and, perhaps most importantly, sloth.

Level 1 - Restoration
Pebble Beach grade restoration will require finding NOS parts that are date coded to the correct year. The bolt heads will align along a common axis. The installation will be at the level of a pro restoration shop - far exceeding original factory specifications.

Level 2 - Refurbishment, New Parts
With reasonable attention to detail, individual will replace offending components with newly manufactured reproduction parts that appear as new to all but the snootiest, number-matching snobs.

Level 3 - Refurbishment, Used Parts
Junkyards are scoured to find replacement components from the same general year, make and model. The condition would best be described as "better than what I had before."

Level 4 - Best We Can Do, No New Parts
For example, in this case, the bumper of the car would be removed, any broken hardware would be discarded and a best attempt would be made from the selections available at Home Depot.

Level 5 - Not the Best We Can Do, No New Parts, Source Material Restricted to Contents of Kitchen Junk Drawer
This is the sort of repair that you encounter on an aging automobile that is collapsing in on itself. As the cost of professional work starts to eclipse the value of the car, the repairs have a decidedly more creative flavor. As you unravel your new crappy car purchase, you will find drywall screws holding together the goddamnedest things.

Level 7 - Removal of Components
Think of this as surgery without the finesse. As issues crop up, simply remove the part and see how the drive ability is effected. I would say, on average, most automobiles are over-fastened by at least 20%. In other words, removal of one fifth of the bolts, nuts, screws, clips and fasteners will not categorically lead to complete failure.

Level 8 - Do Nothing
The most dangerous. When you are completely disengaged from the automobile, failures come with a suddenness that is not only dispiriting, but also quite dangerous.

Though the Camaro is considerably more solid than I found it, there are certainly still easter eggs to be found. For example, there is a terrific example of farmyard welding to patch the exhaust system. With ample MIG wire still remaining at the site of the repair, the hole is mostly closed with just enough of a leak to produce a satisfying growl. The effect is particularly effective while driving through a tunnel - heavy on the gas with the V-8 roar echoing off the walls until you are bearing down on a hapless Hyundai only to lift off the gas to produce an epic backfire amplified by the close quarters. People get out of the way, I assure you.

For the shortcuts and outstanding issues remaining on The Sister Golden Hair Surprise Camaro, I must say, when you are sailing down the road and listening to Van Halen under full V-8 power, you really do find yourself saying, with a shit eating grin, "This is a nice fucking car! It is a piece of shit, but it is a hot fucker!"

Now, it is not a nice car in comparison to a new Honda from the perspective of performance, economy, quietness, comfort, climate controls, visibility, stopping distance or handling, but it has a definite appeal. People give you the thumbs up at stop lights. Fans come and talk to you at gas stations. Wild Stories are told about similar cars. I suppose that is what it boils down to - it is a car that feels like adventure.

Bad decisions are more likely in a 1977 Camaro.
Posted by Mister Jalopy at 2:29 PM