Commencement of the 2007 Garage Sale Season

Federal handgun ammunition laws fall apart in the secondary market.
This is your time to start garage saling. 2007 will be cited in your memoir as the year that you discovered the rich suburban history of the United States. Or the United Wherever. It will be the year that you start collecting the noble cast-offs of the richest generation in the history of the world. Don't worry if you haven't been out hitting it the first few weeks of 2007 as the garage saling season starts now. 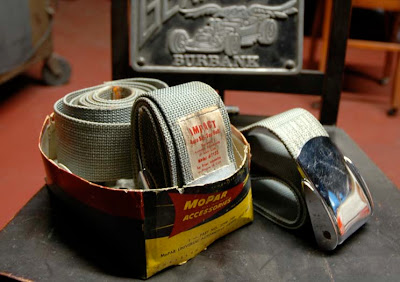 A particularly handsome set of streamline accessory seat belts.
Between the holidays and unusually cold Southern California weather, the garage saling has been pretty weak. Not that we weren't out doin' it. You know, living. L-I-V-I-N-G. Petting dogs, poking through junk drawers, retrieving dusty boxes from attic rafters, joshin' with locals, sharing knee-slappers and rib-ticklers, shaking the hand of shrewd 5 year olds and carting away the family history of those that have decided to unburden themselves of those pesky articles. I do not begrudge. Sometimes, in that dark hour, as I face the walls of grade A junk that I have accumulated, I think about selling every last doubloon of treasure and starting over. At some point, your freedom is impinged by the sheer quantity and the idea of starting to fill a little red toolbox from scratch is pretty tantalizing. Those of you that have never garage saled, I am jealous of the opportunity that stands before you. 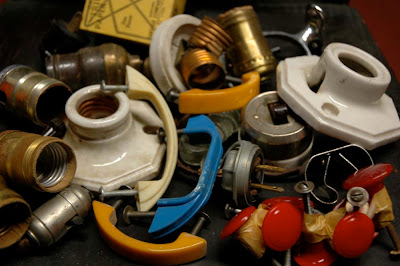 This hodge podge is actually a carefully edited sample from a garage splitting at the seams.

Take a look at the above photograph. Specifically, take a moment to consider the inline toggle switch at the far lower left. And then examine the pot metal plug above the red knobs. Finally, give the octagonal porcelain fixtures a once over.

These are terrifically abundant times of great commercial access, low prices and seemingly, astonishing variety. But the selection is deceptively narrow. If you wanted to spend $500 on a purse, there are likely 2000 choices and next year you will be presented with another 2000 choices. But if you want a light socket that is the not the standard cheap-ass Leviton, where would you go? 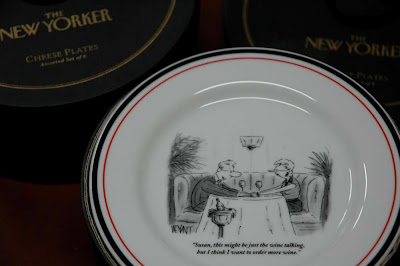 My monocle nearly popped out when I saw these plates. Immediately, I pictured serving desert to cartoon loving friends until I saw all the cartoons had to do with wine. Cheese it shall be. The New Yorker never lets a snob down. 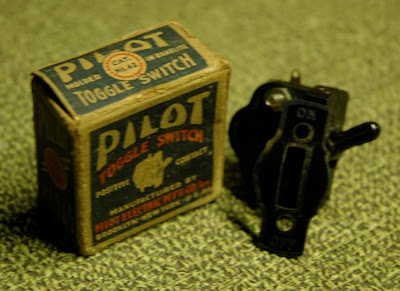 If I were the owner of the Pilot Electric Mfg. Co. Inc., I would be so exceedingly proud to the pull into the parking lot of the Pilot world headquarters each day. Secure in knowing that I produce such a handsome product in such a thoughtfully executed package.

Exquisite packaging is kept in a special section of Hooptyrides, Inc. as a design ideal. Our inspiration not to suck.

Retro is poodle skirts and bubble Wurlitzers. Kooky pink flamingos and boomerang ashtrays. And those are inspired designs. But to like them ironically for their camp value is not enough. It does not pay them due. I am not interested in retro; I am interested in better. And industry had some stuff figured out. Somewhere along the way companies stopped hiring staff artists that could draw and a look back reveals some goddamned good tricks. Not a black box, but black panels that extend almost to the edges. Hand laid Pilot type with an L so beautiful it makes me want to throw myself on the floor. The box lid catalog number is absolutely clear without effecting the legibility of the underlying type. They sure did a lot with two colors of ink.

And, of course, the switch itself - with that bad ass plate - will make your crummy lamp project look like a nuclear submarine or a locomotive. Oh, indeed I would be proud to build an enterprise like the Pilot Electric Mfg. Co. Inc. 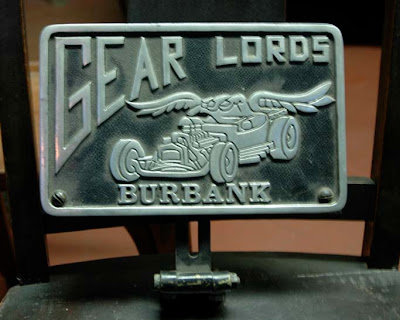 While I have never found an Alva skateboard, Schwinn Stingray, Belgian Browning, Offenhauser engine or McIntosh amplifier at a garage sale, but now I can cross car club plaque (my beloved Burbank, no less) off the list. Given the quality of the artwork - especially the Lords typography, do you think this may have been refined on a school book cover made from a brown grocery bag? 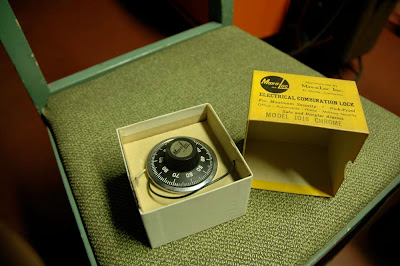 Listed uses for the electrical combo lock includes 'Automotive.'
Should I build a car that requires a combo to start? 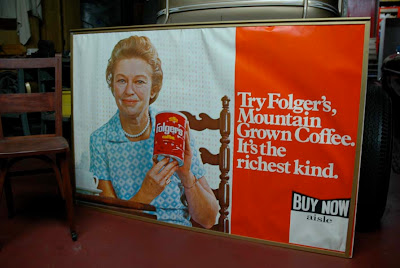 Everybody that has seen Mrs. Olsen have been immediately taken by her. And, it is not that I don't like this poster, but it seems that there is something a little sinister about her look. Not that she has fangs or anything, but it seems like she is trying to pull a maneuver of some kind. Like you would get the can home and there would be a vicious little monkey inside. Or baby's feet. 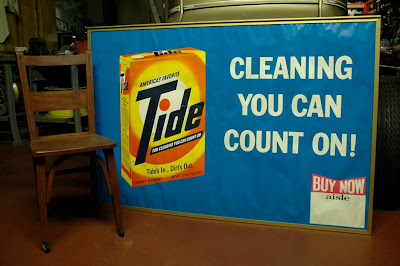 Rather than demonic charlatans trying to sell a can of cat paws, I prefer the clarity of the tide campaign. All the slogans are crisp, focused and honest. America's favorite - probably hard to argue. Cleaning you can count on - I appreciate the faith in their product. Tide's In... Dirt's Out - well, that sounds so easy a coffee can monkey could do it! Clean britches for Mr. Monkey! 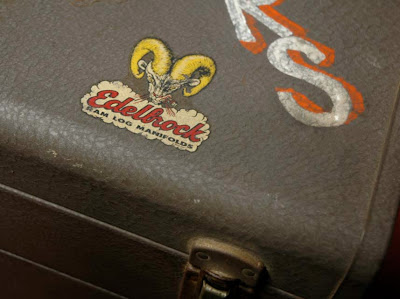 Coop and I went to the Hot Rod Show on Sunday. There was a car with a set of crude ram log manifolds assembled from pipes scavenged from an Electrolux and then welded together by a blind coffee can monkey. Now, I am not here to talk bad about someones ride, but rather, when I see something like that, I think, ' Those look pretty cool! Kinda shitty... but still cool! That is something I could do! Modest skills be damned!' 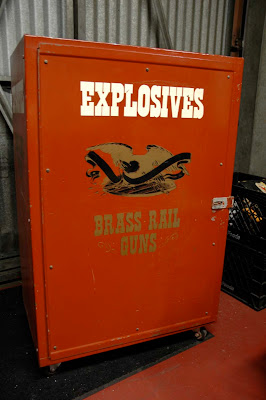 Wow, right? Now I have one of these! Oh boy. Have I ever been wanting one of these. Lined with an inch and a half of plywood in a steel cabinet, the lady selling it said, "It's pretty heavy..."