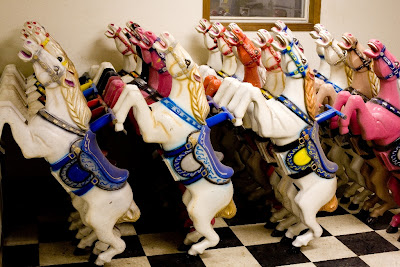 Buying one would be absurd; buying thirty is inspired.

The Carousel International Amusement Company assets, real estate, intellectual property and the owner's pinball machine collection are being sold at auction on June 23rd. These are the moments that you reconsider moving to Pittsburg, CA and, instead, picture yourself as King of Kiddie Rides in Eldon, Missouri.

"Situated in the Missouri Ozarks, Eldon is strategically situated directly between St. Louis and Kansas City - about 150 miles between each of them on the Midwest Corridor..."

Well, I am not a geography expert, but that sounds like the middle of Jackshit, Nowhere. 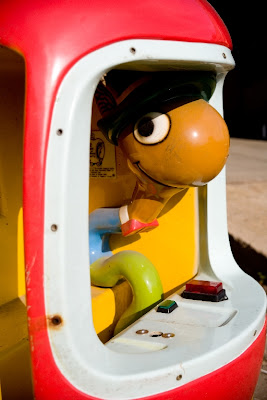 One assumes that intellectual property includes the rights to the wormy apple kiddie ride. Kids LOVE to ride in a wormy apple, especially if your co-pilot is the worm. Is this a Richard Scarry character? I wonder if I could just buy the Richard Scarry kiddie ride licensing agreement - making the bold assumption that it is licensed. Riding with the Lion in the Model T roadster pick-up truck - now that would be a kiddie ride.
Super Auctions: Link
Posted by Mister Jalopy at 6:48 AM

Sheer Terror at the AC Outlet 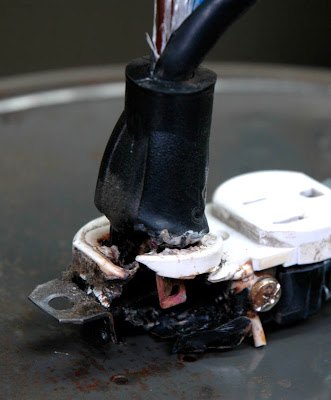 An event like this makes you remember why you fell in love with junction boxes and circuit breakers in the first place.
Posted by Mister Jalopy at 4:08 PM 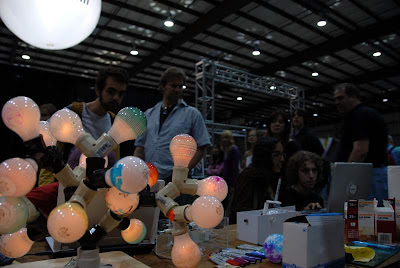 Bruce Shapiro's Light Socket Branching Tree
While at Maker Faire, I met the inspiring Bruce Shapiro who will change the way that you think about stepper motors and the math that can push them. Cool stuff and inspired machines. Whether dragging a ball through sand, pushing a pen around a light bulb, or cutting metal with plasma, he forces you to think about how to push objects through space. On a smaller scale, on a Hooptyrides accessible scale, when I saw his branching bulb splitter tree I had to yell out, 'I did that too! Sorta.' 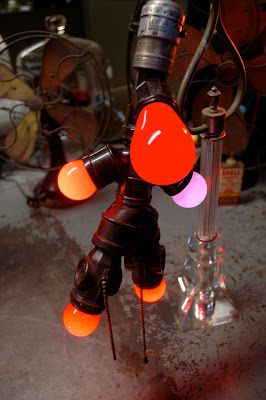 Lamp at Hooptyrides, Inc.
Cool new technologies open up cutting edge opportunities for exploration every day, but extremely mature technologies can offer a very deep arsenal of building blocks. Stop thinking about plumbing supplies, electrical conduit and light bulb sockets as home improvement products but instead as mature, modular building solutions that have an engineered solution for every obstacle.
Posted by Mister Jalopy at 7:01 AM

What is so great about K.E.M. Weber? 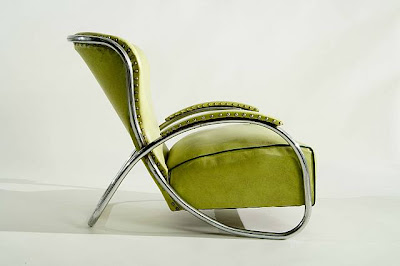 As a younger man, I used to really buy into the whole form follows function ethos, but after collecting a fair amount of mid-grade Danish Modern-this and Eames-like-that, I decided I was more comfortable with the threadbare looks of thinning oriental rugs and old oak that smells of oranges. What I liked in a museum or in the pages of a book was not necessarily the same as what built a comfortable, personal environment and it took a while to figure out that simple fact. 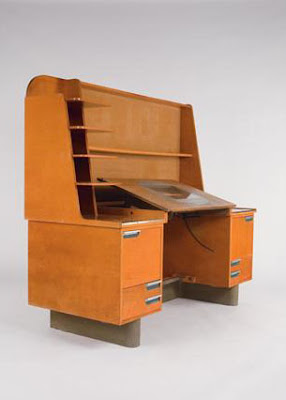 K.E.M. Weber is a little like George Nakashima for me. Beyond modernism, I just would be thrilled to be in the same room with a footstool by either Weber or Nakashima.

Years ago, I was on a strategic hunting trip through the antique stores of East Sunset. Though I pride myself in finding hidden gems, I was with a real life, stone killer, serious collector friend with very, very deep knowledge. From across the room, He spotted a rather plain wardrobe that was so narrow it would hold a single winter coat and little else. That should have been the first clue that it was designed for sunny climates. My pal said, "I bet this is K.E.M. Weber" and, sure enough, he found a Disney Studios property tag on the back. Not only did I not peg it as Weber, as I had not even heard of the man. 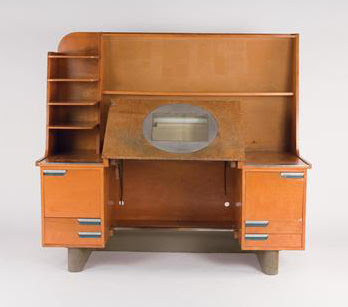 K.E.M. Weber was the main architect at the Walt Disney Animation studios and designed much of the animation department furniture therein. This is the timeless look of commerce. Imagine what it would do for the morale of the animators to show up each day and sit at this exquisite workstation. It is a fitting piece of furniture for the creation of animated masterpieces. 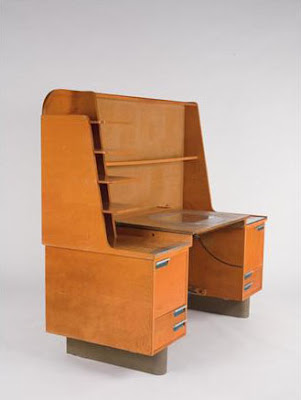 K.E.M. Weber was also an art director at Barker Brothers Furniture during the era when it seemed they could do no wrong. In a disparate styles than Weber's aesthetic, Barker Brothers also commissioned the Mason Furniture Company to design and build Spanish revival furniture for the stucco and red tile roofed homes being built in growing Los Angeles. Though the style was so different than Weber's, they share in common a romanticism of what California could be. 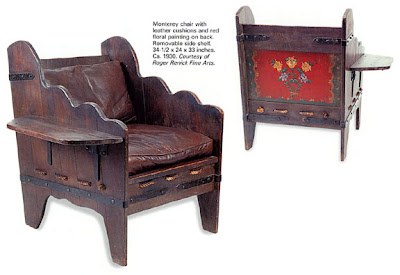 Photo from Roger Renick Fine Arts
While in Pasadena, I sometimes stop at Roger Renick to consider how soulful mass-produced furniture can be. Barker Brothers had a few things figured out.

The all important provenance
So, the Weber desk is at auction tomorrow. It is a live auction at LA Modern and also at trusty old ebay. Estimated at $6000-8000, but I bet it will sell for more.