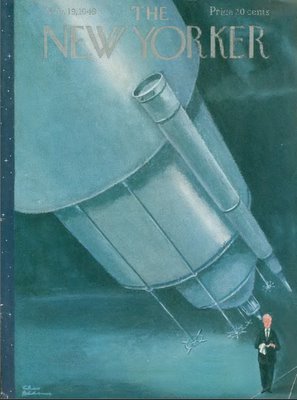 My feelings for the New Yorker are completely unambiguous. It is the finest magazine ever published. It has an Eustace Tilly, erudite, fussy reputation that may be undeserved. Or maybe it is deserved. At times, they take underhanded, cruel pot shots at the less clever wipes, but that is not what makes it a great magazine. The New Yorker tells compelling stories effortlessly.

I also read the Wall Street Journal everyday. Or, I should say, the WSJ arrives everyday and gets read many days. I am always on the lookout for a new angle, a marketing scheme, a tulip ponzi, a cachepot of rubes or a new dodgy scheme. Be assured, the schemes are very dodgy in the WSJ. Perhaps the dodgiest. Like the New Yorker, the WSJ is well written and reading the two in combination sets a high bar. Really ruins Hot Rod magazine.

A few weeks ago, the WSJ skewered The Complete New Yorker. Fairly and unfairly. The Complete NY'r comes on a whopping 8 DVDs, which means the disk swapping is truly gruesome. Memories of Mac Plus - and you thought you would never go back. Each DVD covers about 8-9 years, so if you are reading issues from a narrow time period, the swaps are minimal. But, if you are searching for a broad topic, it is pretty awful. Search for Chinatown tongs and the articles/cartoons are scattered all over 8 DVDs. But, you get there. That is the key. And that is exhilarating.

Chinatown is controlled by the Hip Sings and the On Leongs, the two tongs. They are usually friendly, but when there is trouble, Chinatown is barred to visitors by the police. The real Chinatown is the triangle formed by the intersection of Mott and Doyers Streets with the Bowery. Tells about tongs. Chinatown is becoming Americanized. The first Chinese store opened in New York is still there, Wo Kee's Gift Shop, at 8 Mott Street. The Chinese are good at making money, but are secretive about what they have. Social superiority depends on culture. There is little gambling now and no public opium dens.

Which brings us to the next complaint. Clearly, that extract is not an article from the magazine and in fact, appears to have been written by a drunk 12 year old on a crosstown bus. You can not search the full text of the articles. Understandly, the OCRing would be a terrific undertaking. And proofreading a half million pages would exceed the available intern labor of the five boroughs. 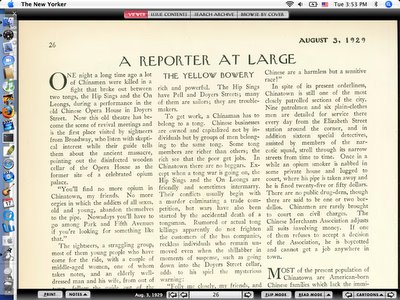 Ideally, it would be great to have a yellowed scan of every page with some sort of click-to-open full text window. Given the choice between full text and scanned pages, I would pick the scanned pages everytime. It is more immediate and it feels like you are reading the magazine when it is in context - full of ads, the yellowed paper and the correct fonts. Overall the scanning is of a very high quality. Some halftoning problems and pages are sometimes crooked but in comparison to the $130 CD-ROM Mercedes Manuals, this is a near perfect reproduction. The Mercedes manuals are an abomination.

But then there is the copyright issue. Can the text be re-printed in a new format? Can it even be scanned for that matter? How could you possibly clear a half million pages?

My big gripe - then I will get back to the praise heaping - is that the whole thing can't be transferred to a harddrive. I have tried everything (put the djvu issue files in the Application Support Library, tried with alias', copied everything into a single directory, etc.) but I can not overcome the indexing that tells the application where to look for what. Has anybody figured this out?

All that aside, I am just extremely grateful that it exists. Whatever the limitations, it can not diminish how magnificent it is. Type anything. Here is an entry on hot rodding... 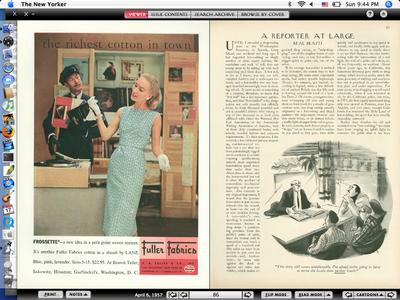 ...almost all of them draped over their cars, the fence and each other in various attitudes of adolescent languor. There seemed to be as many girls as boys, and I notices a striking number of incendiary little blondes, slim as saplings, in toreador pants. The apparel of the rest of the group was decidely eclectic, and even verged on the burlesque of the garb favored by the sports-car crowd. Silk shirts with vertical stripes and narrow-visored caps, also striped, were much in evidence among the boys, but these, as likely as not, were worn with black leather jackets and dungarees, or even Army fatigue pants. Male headgear, above long sideburns, also ran to Confederate caps and outsize checked clown hats. Many of the youngsters - girls as well as boys - wore jackets with names like Bay Buggies, Piston Poppers, Throttle Jockeys, Hi-Way Men, Queens Rods, Drag-Ons, Clutch Busters and Asphalt Angels enbroidered on the back.

Adolescent langour! Striking number of indendiary little blondes, slim as saplings! Outsize checked clown hats! I have looked at 1000 old hot rod photos and have never seen as technicolor a vision as that paragraph. And it is even more compelling when it is adjacent to that ridiculous Fuller Fabrics ad. Makes me want to immediately buy a silk shirt with vertical stripes and a narrow visored cap. Clutch Busters! 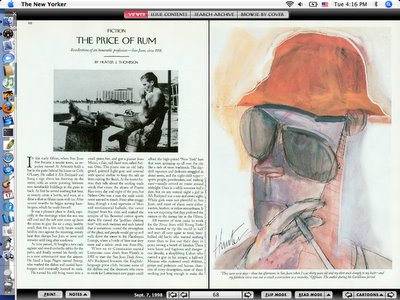 Anything you are passionate about, it has been in the New Yorker. Beautifully told, well illustrated, wonderfully photographed and, often, available nowhere else. 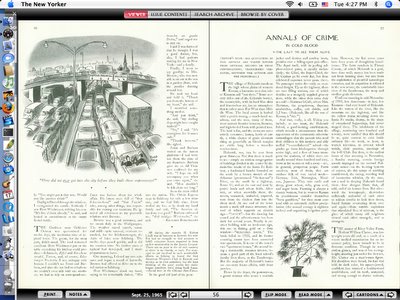 Search for 'Annals of Crime' and you get 133 results, including, of course, the first appearance of In Cold Blood. See why I haven't been blogging much lately? There is only one entry from the Annals of Habardashery and a single entry for the Annals of Intrigue but there are 131 entries for burlesque. Sure, J.D. Salinger, Dorothy Parker, EB White, Woody Allen, Raymond Carver, Prohibition, Mafia, Marshall Fields, Manson, Burroughs, Radiohead, Billie Holiday, Charles Addams, Race Cars, Pauline Kael on the Godfather, and all the stuff that any sensible person would search for, but the real jewels are the things you find by accident.

ANNALS OF IMPOSTURE: about Stephen Jacob Weinberg, alia Stanley Clifford Weyman, a dedicated impostor. He was in addition to being a lieutenant in the French Navy, several doctors of medicine, two phychiatrists, a number of officers in the U.S. Navy-ranking from lieutenant to admiral, five or six U.S. Army officers, a couple of lawyers, the State Dept. Naval Liaison Officer, an aviator, a sanitation expert, many consuls general, and a U.S. expert on Balkan and Asian affairs. He was sent to state & federal penitentiaries on 13 recorded times after his 21st birthday, & spent more than a third of his life inside them. He became Pola Negri's personal physician during the funeral of Rudolph Valentino, in '26, and acting out the role of public-relations adviser to Valentine's manager, he pretty much ran the whole fantastic funeral. Among his escapades was that of posing as "the State Department Naval Liaison Officer" he introduced Princess Fatima of Afghanistan, to President and Mrs. Harding at the White House. At that time Britain had no formal diplomatic relations with Afghanistan, a peace treaty by the two countries were pending, and Afghanistan had a mission visiting Washington. Tells about his capture by a State Dept. special agent, and his trial. For this exploit he was given a sentence of two years in a Federal penitentiary. 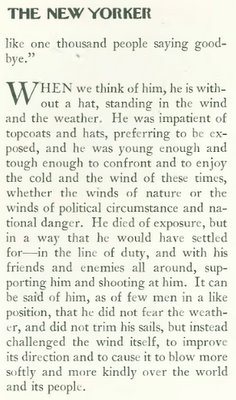 EB White on the death of JFK

With a half a million pages of the New Yorker in your laptop, why write another word?

UPDATE: I no longer recommend the Complete New Yorker. The content is not worth the packaging. And that is saying something.

Posted by Mister Jalopy at 5:22 PM