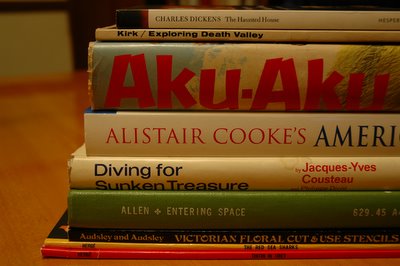 Despite inclimate weather and proximity to the holidays, we still managed to get out to the garage sales. Not the epic battles waged during the summer when garage sales are in such great quantity that it is nearly impossible to hit them all, but it is still garage saling. The pure pursuit as the great bargain theorists call it.

Charles Dickens - The Haunted House - Looks promising but a little weird as it appears to have been written by some sort of committee.

Kirk - Exploring Death Valley - I have about 15 books about Death Valley and do not tire of reading about the limited services at Stovepipe Wells and the Keane Wonder Mine.

Thor Heyerdahl - Aku-Aku - Coop found this one for me as he already has a copy. The dust jacket is in uncommonly sound condition which is good news as the Easter Island illustration is hard to beat.

Alistair Cooke's America - I read the forward this afternoon and am already sucked in. Nothing better than history well told.

Diving for Sunken Treasure by Jacques Yves Cousteau - Just as I will never understand the soda fountain poodle skirt pink Cadillac's of the generation before me, I would not expect another generation to understand the awesome net impact of Jacques Yves Cousteau on kids of the 70s. I feared this book would be a dated relic but it is just superb. It reads easily, the story unfolds with great drama and the whole thing is told in that delightful 'science by way of the brandy sniffer.' Wes Andersen did such a spectacular job of coloring in what kids still hope it is like. 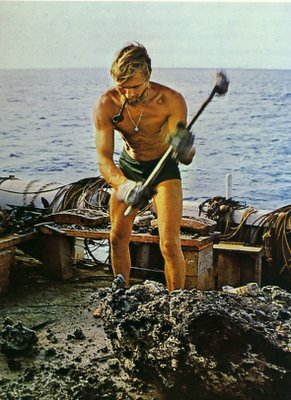 Forget scuba gear - just give me my pipe and a sledgehammer. If the pictures are indicative of the wardrobe expectations aboard the Calypso, it appears that the only requirements were a trim pair of short pants and a pipe. 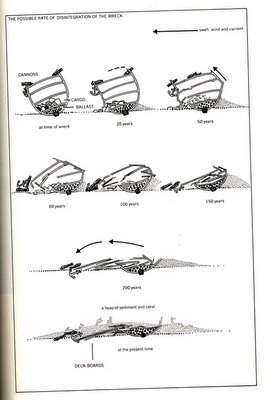 I often bemoan the lack of great diagrams and illustrations in books. Sure, it is time consuming and less sexy than photographs, but a great diagram tells a story in a page that can not be told any better. Granted I can't even scan this page straight, much less draw such a compelling work. 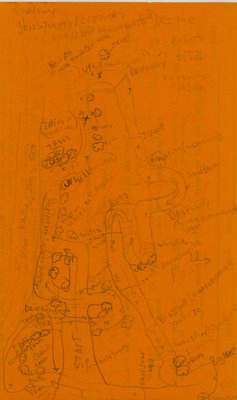 So, in this superduper electronic age where everybody is more clever than everybody else, what kid still reads Diving for Sunken Treasure? Glen! Glen that drew this wonderful map of Glen's Shadowy Motocrossers Course and left it between the pages. Click this picture and click it again. Get it as big as you can. It is worth it. In addition to a legend and the robust accuracy, Glen offers quite a bit of narrative ("Neil Ate it Here Twice (2)! Ha Ha!"), guidance ("Uphill Sandy (Watch It!)") and commentary ("Dropaway with Ruts Underneath (ugh!)").

It is a great map. 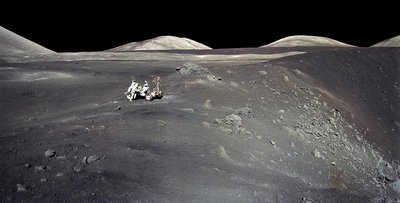 Allen - Entering Space - Of the many things that I love about the Apollo space program, probably the most compelling aspect is the fact that they brought their own car. They have a rocket and a lunar lander, which speaks to a very limited amount of space, but they forgo all sorts of little comforts to bring an entire car! I would love to learn how to library bulletproof books like this volume. With the stamped title on the spine. Seems labor intensive.

Audsley and Audsley - Victorian Floral Cut & Use Stencils - What can I say? When you need a Victorian stencil, you need it!

Herge - Tintin The Red Sea Sharks & Tintin in Tibet - So gooood. Clean, clear beautiful and Herge knows a thing or two about http://mapage.noos.fr/dardelf3/tintin/.