Help! Is the New Yorker copy protected? Or just lame?

There are a million reasons to put the Complete New Yorker onto a harddrive - speed, limit disk swapping, protect original disks and, more than anything, the ability to have the entire New Yorker run on your airplane tray table, in bed, in the backyard or to read when you are stuck at a drive through window. It is just not practical to be swapping the disks if you are jumping out of an airplane or drag racing. 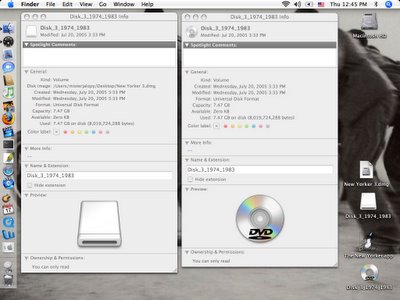 A friendly Hooptyreader (Thanks Thomas!) suggested making disk images and mounting them on the desktop. A brilliant idea. It seemed like I was almost there. But it didn't work. 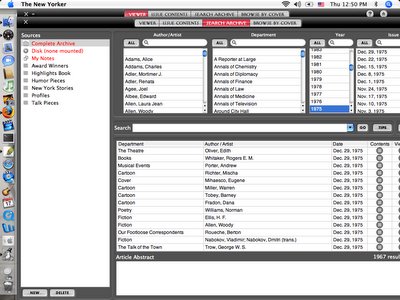 Ya see, the New Yorker application did not recognize the mounted disk. It seems it is only interested in removable media. 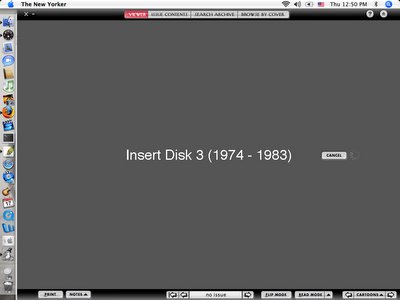 Same problem. Despite the glory of the New Yorker contents, this is a screen you get pretty tired of looking at. And this screen popped up even with the disk image mounted, named correctly, etc.

My main man Dean (Hi Dean!) suggested that I create a Linux virtual server. If I was feeling Linuxy. Well, not that I have anything against Linux, I think it is swell. For other people. I get why it is great - totally. I just can barely operate my Mac with the Mac OS. And I have been using Macs for, gasp, 20 years.
Posted by Mister Jalopy at 12:50 PM