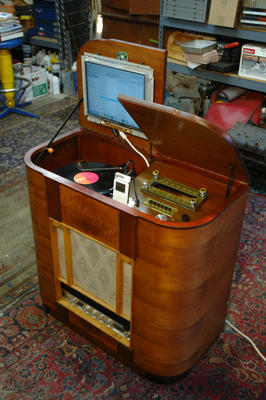 Everybody's asking, why are you so lazy? Why isn't any progress being made on Captian Fantastic, much less your fleet? Are you drunk under a park bench? Why no updates?

It all started when I wanted to hear Dinah Washington's version of Drinking Again. And I hate buying iTunes songs as I know the DRM will eventually bite me in the ass. De-authorizing. Phooey. And why spend $13 on a CD when you could build a wildly complicated mega machine to digitize records? This is what passes for logic at Hooptyrides.

Inside that $15 Farnsworth radio cabinet is a Sansui tuner, a replacement Panasonic turntable, a Griffin RADIO!Shark (not AirShark), an 8 port USB hub, a cheap-o LCD panel, a Griffin iMic, a Griffin Powermate, a Logitech wireless keyboard transmitter, a power strip, a Griffin AirClick, a Sony bookshelf speaker, a Mac Mini and enough patch cables to encircle the world 7 times. 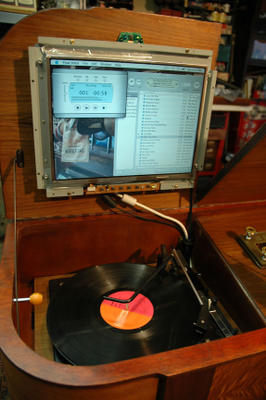 Why build it? Well, everybody needs a garage computer and although it is an ergonomic nightmare, it is a relatively compact workstation. Especially when you consider the lateral real estate that would be required to hook up all those gadgets.

The coolest feature is the legacy Farnsworth radio preset buttons have been converted to operate the Ipod. That is integration! Want to build your own? All the details in a future issue of Make Magazine! 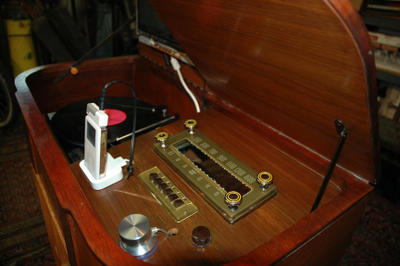 Posted by Mister Jalopy at 7:50 AM