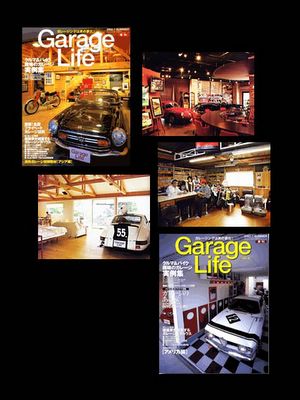 The Kinikuniya book store in the Little Tokyo Yaohan center had a fantastic selection of Japanese magazines. I would devote hours to reading Cutie, Fruits, Gothic Lolita, Smart, the drifting magazines, the classic car magazines and the endless volumes on importing and customizing the Chevy Astro van.

I am, admittedly, obsessive about my garage. I view it as an end in itself. Certainly, it is a tool and the path to completing all sorts of projects but the garage needs to stand alone. A garage that makes no apologies. I am always shocked when people don't want to hang out in the garage. I even had a jukebox to sweeten the deal. It didn't work and now Sammy has it.

As long as you are obsessively interested in something, you will eventually find a Japanese magazine that seems like it was written for no one else. Whether interested in Western shirts, Levis, bomber jackets, Coleman camping equipment, Red Wing boots, retro sneakers or Rolex watches, there is a magazine for you. And these are no flimsy get rich quick schemes; they are beautifully printed, wonderfully photographed and exhaustive. True labors of love by passionate individuals.

The magazine written for me is called Garage Life. Insane coverage of absolutely sick garages. The more sane Japanese garage owners had floor to ceiling windows separating living space from garage so they could keep an eye on their Bugattis and Alfa Romeos. If I had a Bugatti, I would probably want to keep an eye on it, too. Those that slipped over the edge had cars in their bedrooms. In a country where people are expected to sleep in a chest of drawers, a garage must be quite a luxury. Stupidly, I didn't buy a copy of Garage Life, and when I thought better of it a couple of weeks later, Kinokuniya had abandoned their Little Tokyo outpost and pointed me to some far Orange County beach. Ostensibly, I could order online from their West Coast location but it is awfully confusing and lord knows what I would end up with. $20 for a fish head would be a lousy way to start the day.

There is hope, as it appears they have opened a new Little Tokyo location hidden on the second floor of a mystery address.

Posted by Mister Jalopy at 7:13 PM