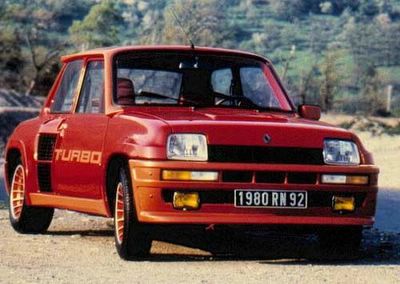 The Lancer EVO and the Subaru WRX STi are certainly fast cars. Astonishingly fast cars. Cars that redefine fast as only four-wheel drive can. But they don't look particularly fast. They look peculiar. They look Japanese in an iconic way that is appealing in its oddity, like a Japanese love hotel used panty machine. Quirky but not badass. It doesn't look like a felony. The Renault R5 Turbo, that is a fast looking car. An SCCA racing Datsun 510. An early BMW 3-series with spoilers and fender flares. Trans-Am cars of the late '60s. Nothing looks faster than headlights covered with masking tape, functional spoilers and, most importantly, tires that extend beyond the traditional fender lines.

A few years ago I was invited to a market research effort on behalf of a big Detroit manufacturer. Admittedly, it was not my considerable automotive knowledge that drew the invitation, but rather that I was local and had recently bought a new car. I was thrilled to go. I had a lot to say. Instead, I sat in an Orange County industrial park and answered a browser-based questionaire that asked how much extra I would pay for a Tommy Hilfiger appearance package. Naturally, I was furious and kicked everybody in the shins on my way out.

A retainer and a piece of the back end means multinational corporations can spend a day in the Hooptyrides Shops to find out just how fast should look. So confident are we, the backend percentage is not as onerous as it sounds.

Posted by Mister Jalopy at 1:18 AM