The Pink Pearl - Sounds like a dirty Italian 'art' film
I couldn't tell you which states were in the first 13 colonies. The Mississippi is a long river, but I have no idea how long. George Washington was the first President and Jefferson was the third, but I don't know who the second was. I can say pencil in French, but have no idea how to say pen. These embarrassing gaps in knowledge are the direct result of daydreaming while racing Pink Pearl eraser Can-Am racecars at my grade school desk.

With the logo side down, the shape of a Pink Pearl was a nearly perfect Can-Am car. Draw wheel wells and mags on the sides, faux headlights at the front leading edge, exhaust pipes out the rear, a two-seater cockpit with rollbar and, most importantly, 8 fuel injector velocity stacks directly behind the driver to suggest an 800 horsepower Chevy big block.

Of course, you would get in big trouble for desk racing Hot Wheels, but the teachers were largely helpless when it came to an eraser car. When accused, you would thrust the eraser in the air and snottily declare, "It's just an eraser!"

Can-Am cars are burned into my brain as the ultimate racecar. Brutally fast and light cars, the Can-Am racing series was the last bastion of unlimited racing before the buttondown 1970's. From the wikipedia entry, "...essentially a formula libre for sports cars; the regulations were minimal and permitted unlimited engine sizes (and allowed turbocharging and supercharging), virtually unrestricted aerodynamics, and were as close as any major international racing series ever got to anything goes..." 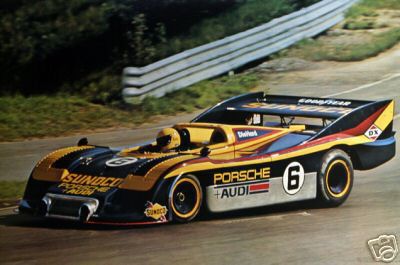 Porsche showed up with 1300 horsepower and absolutely inspired livery
With a rule book that would fit on the inside of a matchbook cover, it was an unambiguous challenge to build the lightest car possible, stuff in the world's most powerful engine and rivet together enough aerodynamic downforce to keep the car from taking flight. A simple plan, but the beauty of the Can-Am series was the terrifically inventive ideas (if it worked) or crackpot schemes (if it didn't) to hopefully best the smartest designers and drivers in the world. 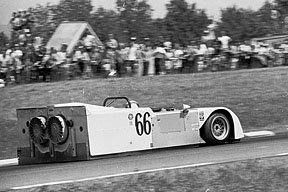 Jim Hall blew the paint department budget on snowmobile engines
So, sitting in front of a full race, uncorked injected big block is probably pretty loud. Then add a 2-cycle 'ringdingdingringdingdingdingding' snowmobile engine running two giant fans to suck the car to the track. The Chaparral 2J 'Sucker' had a Lexan skirt that wrapped the perimeter to create a race car suction cup that had a full 1/2 G advantage over the other fellas. Imagine running down the first straight and trying to decide when to lift your foot off the accelerator. With McLarens, Porsches, Lolas and Ferraris behind you, how far are you going to push into the turn?

Fearless astronauts. That's who was racing these cars. And mad scientists were building them. 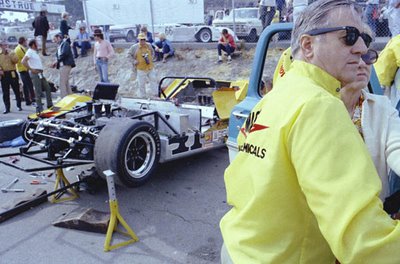 Not Tommy Ivo, Not Nailheads; A Rotax motorcycle engine for each wheel
Visionary genius is just a few mistakes away from crackpot idiot. The MACS-IT team put together a seemingly preposterous race car with a motorcycle engine at each corner. If it had worked, they would have been heralded as prescient instead of limping home with their tail between their legs to forever explain the 45 mph average lap speed delta between the MACS and the Chapparal.

That's innovation. Throw everything at the problem, pick a couple of promising ideas from the mix and tweak them with all the passion in the world. Like the dry lakes boys. Or when Smokey Yunick showed up at a NASCAR race with a nitrous oxide set-up after reading about nitrous use on WWII aircraft. 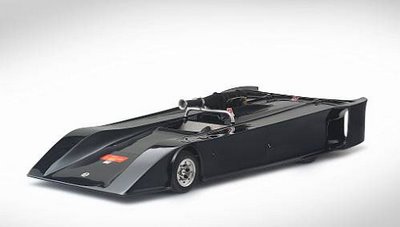 Shadow Prototype - Like Han Solo in Carbonite
So, why the sudden Can-Am obsession? As these things often start, there is a car for sale.

Sometimes, you see something that makes such intuitive aesthetic sense that you get a bit of a tummy ache and can only utter a single, 'oh my...'

Rather than focusing on engine count or vacuum downforce, Don Nichols decided on a viciously low profile to beat the best.

A few quotes from the Bonham's Auction listing:

"At the nose of the car the overall height is determined by the driver's feet. Harris has beat poor George Follmer, who drives it, completely splay-footed; the pedals work on nearly vertical axes, and there is room for only two of them. The clutch is operated by a cockpit level at the driver's left-hand...

Pete Lyons, the absolute dean of CanAm covering race reporters, continued: The car is hard to believe even when seen, so tiny is it, literally knee-high. It all depends on the minute Firestone tires, which have 11ins and 16ins footprints but are mounted on wheels 10ins and 12ins in diameter."

I love everything about the Shadow Lowline Prototype. Looks like it is carved from a solid block of some sinister black space polymer. Black is faster than white, lower is faster than higher and with that bazooka air intake this appears to be the fastest automobile on earth.

Having started only two races and finishing none, perhaps this is the Can-Am car for me. The Shadow Prototype is so oddball that self-respecting collectors will consider it a curious footnote but might not be willing to devote the garage space to it. As I have no self-respect, perhaps I should sell some of my best stuff, some of my worst stuff, and all the mediocre stuff to head up to Monterey with $50k in a paper bag.

When the auctioneer says, 'Do I hear an opening bid of $75,000 for the 1968-69 AVS Shadow-Chevrolet 'Lowline' Can-Am Racing Sports Initial Prototype?' I will leap to my feet and thrust my grimy paper bag in the air - just as I had with the Pink Pearl racecar eraser - and yell, "FIFTY THOUSAND US DOLLARS!!!!"

Then, I will sit back down as somebody bids $55k and watch the whole thing spiral out of control. That is the disappointing thing about auctions for those of us of more modest means - our first bid is our best bid, our highest bid and our last bid. 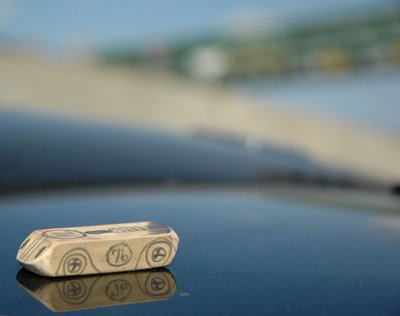 Think you can do better? I wouldn't doubt it. Send pics of your entry for the Eraser Nationals
This eraser is not a relic from when I was a kid nor was it found at a garage sale. I drew it a couple days ago. My idea of fun is fundamentally the same as when I was 10 years old. I still like to go as fast as I can. Still like ice cream bars and arcade games. I enjoy walking along railroad tracks and idle fishing when there is no hope of catching anything. I build stuff for the joy of building. Go karts and minibikes, pinball machines and firecrackers, tree houses and ghost towns, pocket knives and monkey wrenches.

Four engines or snowmobile engined fans? Who would have thought either would work? Sounds like something I would have drawn on an eraser 25 years ago, though I would have combined the theories for a full five engines.

Posted by Mister Jalopy at 9:19 PM