All Hail the Ragged Edge 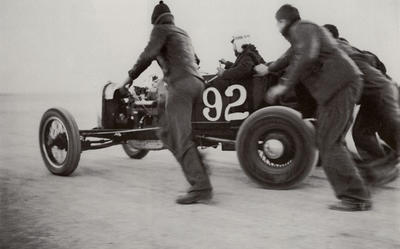 The third great American innovation, after baseball and jazz, is hot rodding. Sure, one could argue that the big third is rock and roll or the craftsman bungalow. And I am insane for The New Yorker but it is not so different than its predecessors to be an American revolution. I have forks stolen from the Algonquin, had lunch at the round table, own bound copies of The New Yorker, enter the cartoon caption contests and bought a new laptop largely in anticipation of the The Complete New Yorker

, but it is not hot rodding. 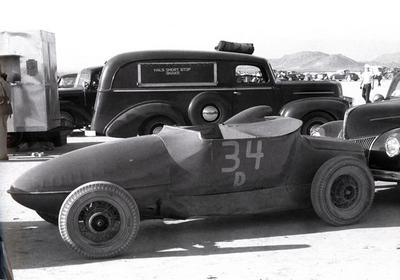 Look at that fighter plane belly tank nose coned, rear engined, hand painted numbered, wire-wheeled death trap. Defined as much by failures as successes, hot rodding was a crazy hodgepodge of trying everything and seeing what stuck. Though a belly tank on the nose didn't catch on, the later belly tank cars were a true cigar shaped revolution.

Hot rodding is a mirror of what it means to be American. Scrappy ingenuity. Doing the best you can with what you have. Trying, doing, failing, refining and succeeding. More with less. There was no money or magazine to be featured in, just a pure desire to go ever faster. 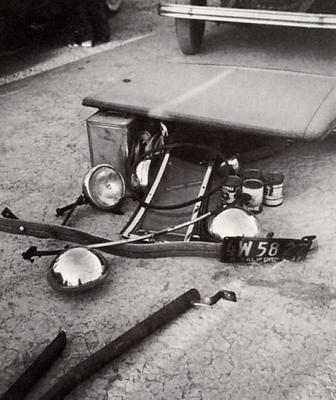 One day, you are nothing. A loser with an old $30 Model T. Your friends come over and help you remove the fenders and the next day at school you are a Greek god. Some aftermarket parts from the nascent Los Angeles speed industry and you are on the way to lakes. Remove the headlights, bumpers, toolbox and anything not absolutely necessary and you are racing six cars abreast across the dry lakes.

Eventually, any car person must get around to the Model A and Model T. Certainly any car person with an interest in the social history of the United States. Fords were not the fastest cars of the time, but they were plentiful, cheap and, perhaps most important, modular. You could swap newer, more evolved parts to your old bucket of bolts and have something absolutely terrifying to drive to Bob's. The post-war era was an amazing time in US history and it is captured in the Southern California hot rods. It was optimistic, infallible and a comparatively monied paradise. Not that there weren't serious issues that would make your skin crawl, from racial divides to wicked dentistry, but there was a national pride that can only be imagined now.

Flush with the end of the war, the end of the Depression and plenty of blue-collar, union, skilled jobs, Los Angeles was an absolute paradise. GIs coming home to sweethearts and mothballed Fords. A brand new bungalow on a street that was an orange grove the year prior and a desert not long before that. With new skills learned during the war years, hot rodders came home with a plan and copious high tech surplus was waiting for them. New exotic materials and engineering skills meant hot rodding made great leaps in comparison to before the war. Since cars were not built during the war, severe latent demand meant new cars were purchased and broken down Fords were everywhere for a penny, nickel and dime. The sounds of scratchy AM radio broadcasts, threadbare rugs, tall dressers on skinny legs and the smell of orange blossom blowing through the window. A true paradise.

The absolute epitome of that, the zenith of that moment, the absolute driving American spirit is all captured in the dry lakes hot rods. The resourcefulness, the community of hot rodders, the pushing the envelope, the ten things tried that didn't work out for every one that did, the outlaw spirit, the scrappy attitude and the fearlessness. It was so much more punk rock than punk rock ever was. 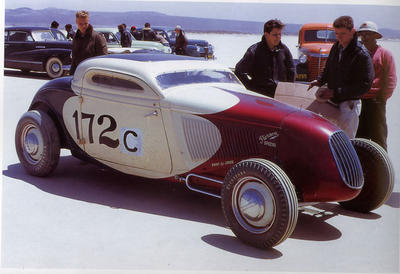 And all that coffee cup knowledge, experimentation and backyard engineering netted real advances. As evidenced by the incredibly beautiful Pierson Brother's Coupe, those skills came together to great effect. Talk about looking like 150MPH standing still, this car gives me the chills.

That hot rodding, try anything mentality continues today. Teams in my beloved Formula 1 make changes to the car race-to-race, week-to-week. But, the big questions were answered long ago by the dry lakers. The Formula 1 effort is hunreds of millions of dollars and god bless em. It is absolutely thrilling, but the advances are made in the windtunnel, not in a suburban garage. Formula 1 is the European Union space effort. It's NASA technology. 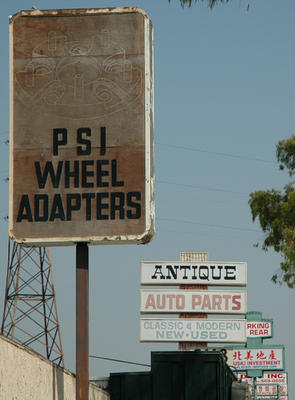 What is being done to preserve the history of the third great innovation? Coop and I found out. In Rosemead, California, there is a temple to hot rodding. EARLY hot rodding. No small blocks and Hemis. Lucky for all of us, the stewards tending this treasure trove absolutely know how important it is. And the knowledge is deep. 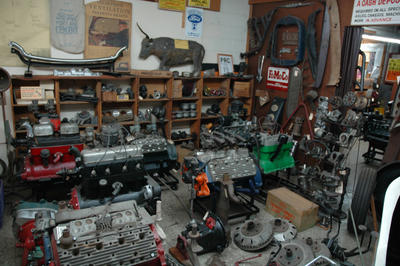 All the trick shit. All the coolest, rarest speed equipment from back in the day. Absolutely beautiful in form and function. Nothing for sale. Well, new stuff and some repop for sale, but don't even joke about that Cragar head, Lasalle grill or those Buick drums. It is not going to happen. And thank god. Nothing here should be sold, because if I was a rich bastard, instead of being a regular bastard, I would buy it all. And I shouldn't be able to because I wouldn't let people like me look at it. And even though my passion runs deep, I don't know squat about this stuff comparatively. 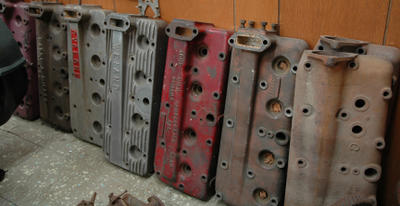 "Do you have any old aftermarket flathead four heads?" I asked.

"You mean to look at? Cause I just want to be clear what we are talking about..." as he squinted his eyes.

"Well, yeah, if you have some more time, you can come in the next room," he said.

More time? We would still be there if we could. 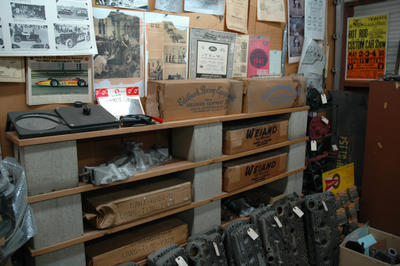 Yes, those are original Edelbrock and Weiand boxes. And yes, they are full of heads and manifolds that have never been on a car.

The worst thing that could happen would be for some rich jerk to buy the whole kit and kaboodle. Second to that, imagine all sorts of what-have-you jerks buying bits and pieces only to be scattered across the country. The third worst case scenario would be to have it all boxed up and put in museum display cases. This stuff belongs in this old auto parts store. This is where it was originally sold and there is something surprisingly satisfying seeing it as it should be - in between seemingly incongruous oddball collections like church keys and punk rock flyers from the 80s. Somehow, it all makes dusty sense with the corny jokes written on construction paper. 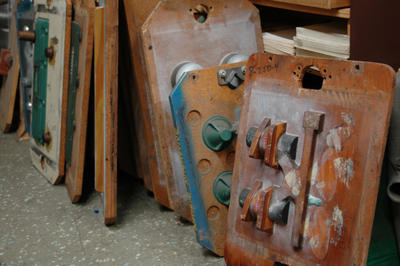 So, what's more rare than original speed equipment in the original boxes? How about the molds used to cast that same speed equipment? Yeah, I guess that would be pretty rare.

I will never be anything but a spectator to jazz and baseball. Sure, I could learn to play the trumpet but I will never be able to participate at a meaningful level. And playing on a softball team would never scratch the surface of the complexity of the baseball diamond and how the physics of that space has kept the game much the same as it always was.

But I will be able to build a pretty decent hotrod, and have the same joys of mechanical ingenuity and hair raising wire wheel thrills that the dry lakers enjoyed. In twenty years, I may build a truly great hot rod. More likely than my reaching the level of Ellington or Babe Ruth.


Bibliography:
The Birth of Hot Rodding: The Story of the Dry Lakes Era

The books of Don Montgomery

Muroc: Where The Hot Rods Ran - My favorite as all photos were taken on a single day in 1938

Posted by Mister Jalopy at 8:28 PM