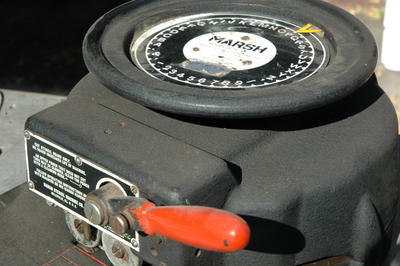 I am fascinated by machines that operate without electricity. Powered by individual effort, steam, fuel or gunpowder, there is just something satisfyingly low tech about a machine that operates without the tether of an electrical cord. Clearly, I am of a generation raised with Foxfire

books. Naturally, since I collect nearly everything without concern for size or utility, I have sliderules, Curtas, a telephone that operates with a hand crank, a counting machine and this staggeringly beautiful, and back-breakingly heavy, stencil maker. One would think that worldwide demand for stencils has not changed appreciably in the last 50 years, but when was the last time you saw such a machine?

The worst thing about car batteries is notorious leaking of extremely corrosive acid. The battery box on the 1961 Mercedes 190b is literally rusted away. The rest of the car is virtually rust-free but the I am going to have to rebuild the battery box from scratch as currently water pours into the passenger compartment through what used to be the battery tray. Recently, I was thrilled to buy an Optima at a garage sale. This is a true advance in battery design as they are 'gel' based and sealed. They can be mounted upside down and have huge reserve power ratings for the hard cranking diesels. 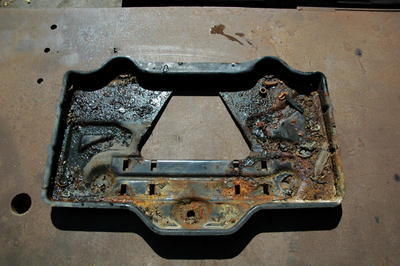 So, the battery light came on the 1987 Mercedes 300TD and I decided to swap in the Optima. Of course, the battery tray was rusty as hell. I think of the 1987 Mercedes as a new car, but twenty years of slowly leaking batteries told a different story. I removed the tray, wire brushed it and painted it with miracle product POR-15. If you have never used POR-15, you are in for a real treat. It is a rust preventive paint that is thick like molasses and results in a tough as nails coating almost like an undercoating. Complete with brush marks. The instructions for POR-15 ready like a lazy man's best friend. Right there in black and white, they say to not worry about residual rust. 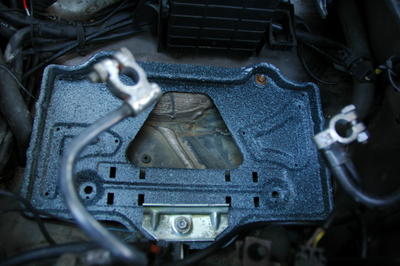 Then I sprayed the tray with Eastwood Trunk Splatter paint because I thought it would be fun. And it was.


Naturally, replacing the battery did not solve the battery light problem. With the modern cars with modern voltage regulators, you can troubleshoot charging problems easily with a voltmeter. People will say, 'Oh, you need to load test the battery! You have to do voltage drop tests between this and that! And do all this other stuff.' Which I suppose is true, but if the battery reads 12.5V with the car off and 12.5V with the car on, it is a damned good bet that the alternator is not charging. 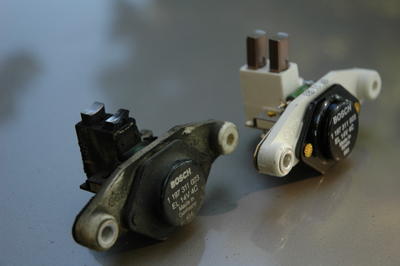 Following my infuriating run-in with the Chevy truck fuel sender, I was prepared from the worst from Mercedes. Admittedly, it would have been nice to buy just those worn-out $3 brushes but things have changed since the time of the Model T. I realize that manufacturer's can not sell every single component in every vehicle and this combination voltage regulator with the brushes replaces the two most common failure points in a single $53 package. Perhaps it is telling that I feel this is a reasonable solution.

Before I got it installed, I had to drive an hour to my mother's house to, among other things, repair the taillights on her Ford Escort station wagon. But, I had a fresh battery and even without the alternator, I thought I could get there and back - if I did not have to use headlights. In case I was wrong, I brought a battery charger but unless a kindly widow let me charge my battery at her quaint farmhouse, I don't know what good it was going to do me. Widows with farmhouse apple pies are getting pretty scarce in Los Angeles.

Needless to say, the battery didn't hold. But it was thrilling! Diesels do not need electricity, per se, to run. To start a diesel requires electricity to turn the starter motor and to warm the glow plugs. But once the engine has started, the residual heat and awesome engine compression enable all subsequent combustion. In theory, this is correct - once running, diesels don't need electricity. But when I was driving, I wondered if it was really true. Would the diesel injection pump require computer controls? No, it is a mechanical system. Would something else need computer control? Would it really run? Probably a line of thinking best pursued from the couch rather than on the freeway, but you know, I am a scientist! Hands on!

And it was amazing. I felt like I was in an Apollo space capsule. You don't generally think of an automobile as having a host of electrical systems, but, boy, once they start failing, you can think no other way! First, the A/C stopped working. Then the fan stopped working. And the dash lights went dim. And the gas gauge quit. The power window barely went down. And the battery warning light went out. There was not enough power to run the battery warning light! But, the car kept running! At 80! I imagine the brake lights were not terribly bright, so, you know, not a great idea. When I got home and turned it off, I tried to start it. Totally dead.
Posted by Mister Jalopy at 4:39 PM