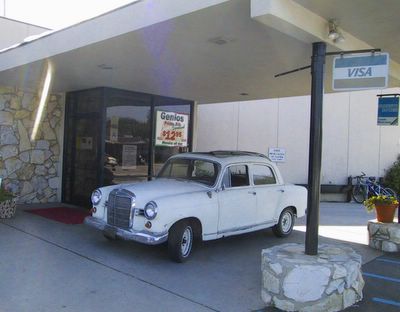 Good price on prime rib! Making the scene at Genios, using the portico as intended and elicting extremely faint praise from the staff, the Mercedes 190b is a true survivor. Every car I have ever purchased has been a fantastic mistake. Every car has been significantly worse than I originally thought and charming in ways I never imagined. The modest 190b is the very essence of restraint. Let's face facts, I pulled the 190b from the jaws of the crusher. The water pump whirs like a plane about to take off, the master cylinder still requires a few pumps to get it to stop, the roof is gone, the bumpers could hardly be more bent while still being attached, it needs ball joints something terrible, the bondo is cracking off the front fender and you can tell more than should be disclosed by reading the multiple layers of paint as if counting the rings on a tree.

I say I will never buy a car that has been dormant for over twenty years as it is just too god damn much work and money, but I doubt I could say no to this little charmer. I was so happy trying to keep the Mercedes in its lane that I was smiling and waving out the Webasto sunroof at people I don't even like. If it wasn't still so damn terrifying to drive, I would sit on a stack of phone books and poke my head out the roof. With googles. Like Mr. Toad.

From the condition of the Visa sign, I would expect that it has also been in the sun since 1984. Surprising that it doesn't say BankAmericard and, disappointingly, the Carte Blanche and Diners Club International signs are long gone.

I should have pulled that red carpet entry mat over and tucked it under the front wheels.
Posted by Mister Jalopy at 9:58 PM