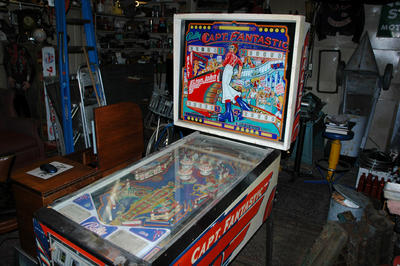 Clearly, I am powerless against the powers of obtainium. There is a never ending onslaught of really cool stuff and sometimes I am just in the way of it. Last Thursday night, I was on the way out for the evening and a mere block from my house I spied a pinball curbside! I flipped a bitch and sure enough, there was Capt. Fantastic hauled out to the trash! I raced home, got my refrigerator dolly and ran back the block to retrieve my score. There was no possible way to get the complete but disassembled machine back as the head was disattached and I am no miracle worker. With the machine attached and the legs sticking out like a dead beetle, I was too wide for the sidewalk and had to drag down the middle of the street to my house. Quick. I was afraid somebody was going to lay claim to the head and then where would I be?

With the bulk of the machine in my driveway, I raced back down the street in the Country Squire and there was a grizzled alcoholic pawing the Captian Fantastic and the Brown Dirt Cowboy backglass. I excused myself as I pushed past him and loaded the head into the back of the wagon. A tired old wino is no match for my pinball desires. He said, 'Ok, you can have that, but I am taking this!' as he thumped his hand on a shit brown file cabinet. Whatever, pruno. 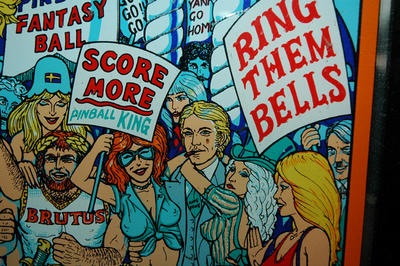 Knowing the pop culture oracle had pinball machines, I called him to gloat and get the skinny on my find. Naturally, he knew everything about the machine, the artist who did the backglass, the complete history of Bally, pornographic pinball bootlegs, the movers and shakers in the San Fernando Valley pinball world. He even had the Captain Fantastic pinball in the his personal pinball hierarchy in the lofty postion of number three (after Fireball and Wizard.) After I was peppered with questions, we figured out this is the ultra-desirable, pre-censorship version with Hitler cheering on the pinball wizard. There is some subversive shit in that backglass. It is like a 1970's Hieronymus Bosch. 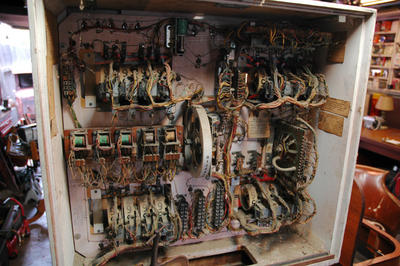 Does it work? Of course not! It was free for Christ's sake! People generally don't throw away shit that works (but then again, they don't generally throw away thousand dollar pinball machines either.) It works a little. I replaced a fuse, connected the head, cleaned up the coin mech, retrieved a stuck 1983 25 cents real live quarter, was able to rack up a credit, get the lone ball unstuck and start the game. Sort of. It is stuck in a 'reset the dials' mode and won't start actual thrilling play. I have monkeyed with it for a total of about 15 minutes so the limited progress is to be expected. I have high hopes. And before everybody gets carried away with how lucky I am, nothing like that ever happens to me, etc., it should be pointed out that the C-clamp seen in the lower center of the picture was not included in the -.25 cent price. That was from the Jalopy garage. Just to be clear.

I am not afraid! I fixed a Seeburg DS-160 jukebox that was also terrifically complicated. Just cleaning the playfield, replacing the rubber bumpers and washing the backglass will be a great deal of fun. I haven't disturbed a speck of dust, because the initial cleaning is perhaps the finest minutes of ownership. Getting something out of the trash that looks like garbage and turning into something spectacular is a wonderful way to spend an afternoon. After putting in the effort, I am always tempted to show it to the previous owners who threw it away or sold it for a pittance and say, 'You lazy bums! Look at this thing! It's magnificent! It is better than anything in your house and you threw it away! What's wrong with you!?'

You see, I am powerless against junk. I am like a junk magnet. If I am forced to leave my property lines, stuff just finds me. Granted, I am a predatory buyer and relentless trash picker. If given the choice of walking down the sidewalk or the alley, I will always pick the alley as I find what people are hiding in the back is invariably more interesting than what they are proudly displaying in the front. I can't walk past a trash can without looking inside and will turn around the car to retrieve a magazine from the middle of the street. Life is a rich bounty. The things we find in the trash are better than our forebears could have ever hoped to buy.

UPDATE: I would say I found my people, but they found me! Dumpsterworld.com!
Posted by Mister Jalopy at 9:41 AM