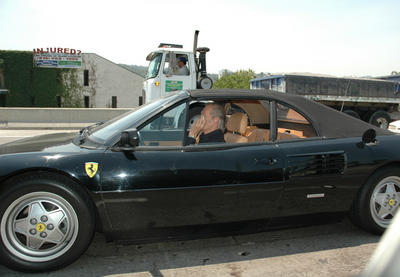 Coop and I were on our way back from Fabulous Fantasies when we spotted this black Ferrari Mondial with the gas door open and no license plates. I pleaded to catch up so I could take a photo. The case could be made that there is no bad Ferrari and that argument could hold water if it were not for the Mondial. Even the Ferrari 400i is pretty cool in that over the top Italian design sort of way and, after all, even though the 400i was a four seater, it was Enzo's daily driver. There is no excuse for the Mondial. V-8. Four seater. Uninspired design. No wonder they cost less than a new Civic. And check out this sobering thread on Ferrari maintenence costs. Valve adjustment requires removing the engine!

So, who owns a Mondial? With the gas door open? Without plates? A $15,000 car that requires $6,000 tune ups? David Kung Fu-Fucking Carradine! My camera is not discreet and when he saw me taking his picture, a look of pure hate washed over his face. As if I asked if I could take a crap in his hat!
Posted by Mister Jalopy at 3:47 PM