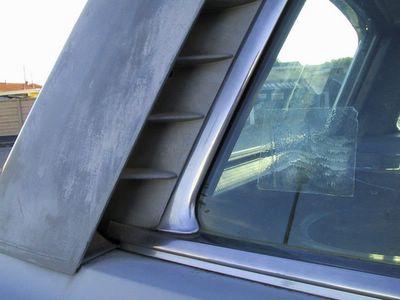 The big questions for the newest addition to the Hooptyrides fleet: Where are you going to keep it? Is it for sale? Is it a modest automobile? A modest automobile for sensitive poets? For aesthetes? For Americans?

The 1965 Ford Country Squire is for desert rats, for night snake hunters, for amatuer naturalists, for Gila Monsters, for dark highways and most of all, for hope. As evidenced by the faded glory in the back quarter glass, it is an automobile for Americans. It is a vehicle for traversing the great western ranges with 7 friends. The 1965 Ford Country Squire is for those that like to travel with a full bar as even Schumann undoubtedly thought impossible to contain inside a single automobile. The western canon, the full OED, the 1972 Encyclopedia Brittanica would all fit with still enough room for Jefferson's entire library from Montecello. It is possible that the 1965 Ford Country Squire could contain all knowledge to the 17th century in its vaulted luggage compartment. Indeed a car of great authenticity and rich patina, I am not partial to naming automobiles but 'surface rust' would be fitting. Yes, it is for sale. For $2250, trades accepted.

Rest assured, Step II-IV become quite aggressive and we mention only to make the point that the 1965 Ford Country Squire, though modest in appearance, is all potential. Perhaps quibble with the addition of the Fresh Air Package and instead update with a Pertronics electronic igniton and you will have a race car, a station wagon, a patriot, an explorer and daily transport that commands attention for under $3000. Maybe a little more.