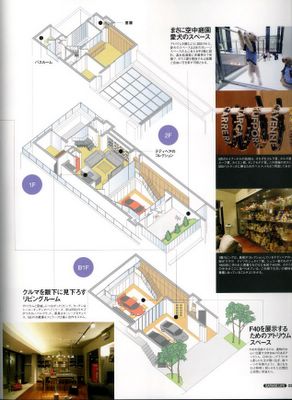 In the center diagram you can see the poodle run with the poodle's three small trees. Below that are what appears to be the poodles collars, which are named: Carrera,Targa, Ruf Porsche, Cayenne and Modena. Just under the collars is a photo of the poodle toy display case. It's nice this fellow is not obsessive only about cars.

The center covered atrium is remarkably similar to the Philip Johnson Rockefeller Townhouse. Except, instead of a single, perfectly groomed tree for contemplation, there is a Ferrari F40.