Absolutely exhilarating and terrifying at 28 MPH! The Puch! 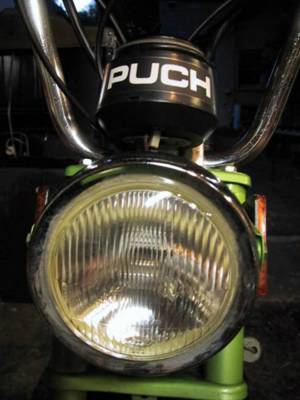 Everybody has been asking... What's new with the Puch? Is it running? Are you riding? Crashing? Weeping?

In a word, WOW! What an exemplary machine. Though modest, it is delightfully Teutonic and over engineered. The Puch does not know and will not consider itself, 'just a moped'. 150 MPG, Austrian pedal motorcycle with headlight, tail light, brake light, reflectors for safety, emblazoned proudly 'Puch' in at least 20 places, the Puch makes no excuses.

I replaced the fuel petcock, the fuel line, added an inline fuel filter, replaced the carburator jet (there is only one) and vigorously flushed the fuel tank. It still stinks a little like bad gas and I would expect the inline fuel filter will need to be replaced semi-regularly. Also, the rear view mirror was broken, so I replaced that. And, the On/Off kill switch was broken beyond repair, so I replaced that was well. The Puch quality is never more apparant than when replacing components. The new On/Off switch works and will work for years, but what a miserable piece of junk. Just what you would expect from a Chinese import On/Off switch, which makes me wonder about the new Chinese mopeds.

The Puch runs like a damn dream. I have long espoused the merits of relative speed. Sure, a Geo Metro only gets up to 50mph but try driving it with cruise control set for 50 through a small downtown shopping district. And a golf cart may only reach 15 mph, but try the giant slalom in an underground garage. When you hit a parking stop at 15 mph, it feels plenty fast.

At 28 mph, the Puch handles capably and as it is supposed to, but it still scares the shit out of me. As I ride around my neighborhood, I feel like a really Easy Rider until I realize my feet are still on the pedals.

Posted by Mister Jalopy at 5:28 PM