The Type of Screw That Holds Plastic Bullshit Together 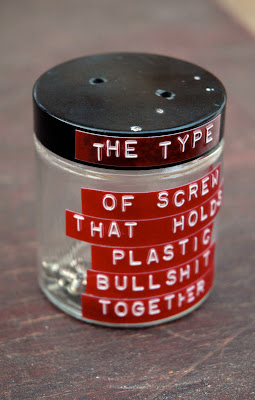 I have always loved the term 'nail straightener' as it refers to an individual so pragmatic and so frugal that they will straighten an old nail for reuse. When the term is used, which is infrequent, it is often a term of derision to poke at the sensibilities of an individual who has such a low opinion of the value of their own time that they would engage in such penny folly.

Though I don't straighten nails, I do cut the power cords off discarded VCRs that have been left in alleys. And before I throw away a plastic coffee maker or inkjet printer, I salvage all the screws that hold it shut. Beyond being frugal, it is an issue of not being able to buy that type of screw. Screws for holding plastic cases shut are vaguely self tapping, usually chrome plated, with threads finer than a wood screw but not as aggressive as a drywall screw. Ubiquitous in the world, holding our junk together, this type of screw never makes an appearance in even the most well stocked hardware stores.

I suppose if you are specing hardware for manufacture, you know the real name, but I simply know it as The Type of Screw that Holds Plastic Bullshit Together.
Posted by Mister Jalopy at 7:13 PM