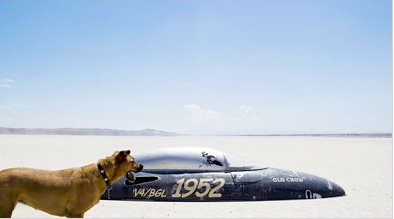 A few months ago, Ry Cooder and I went out to the dry lakes with the Old Crow Speed Shop, the Bobby Green Bellytanker and the New York Times. The article is out tomorrow and it is wonderful.

There is the Los Angeles that people imagine, of red carpet premieres, Botox lunches, velvet rope nightclubs, Venice bodybuilders and tony boutiques. It is not a fable. That is real. Or, at least, it physically exists.

Then there is the Los Angeles that I know. Aerospace surplus hardware stores, smoky and ashtray-less Koreatown English hunt club bars in crumbling hotel basements, perfect beer buzz lunches in filtered sunlight at the Farmer's Market , the wild dogs of Pacoima, sprawling thrift stores, trolling junkyards for old diaries and Polaroids, the drag races at Pomona, chrome plating shops, backyards stacked with 300 bicycles, gold miners eager to show their biggest nuggets, fishing for carp in the Los Angeles River, optimists taking over art museums, the nicad battery selection at Electronic City, the metal patination case at Industrial Metal Supply, Kit Kraft Hobby, the gem vault at the Natural History Museum, the Szechuan peppercorns of Alhambra, the churlish bartenders at Hop Louie, the sneaker shops of Little Tokyo, the imported coldcuts at Monte Carlo Deli, the Japanese garden on the roof of the New Otani Hotel, the bicycle swap at the Encino Velodrome, the DDR kids at the Santa Monica Pier, the mustard at Philipes, the dim sum carts of Monterey Park, the carnitas at Carrillos, the buffalo at Hart Park, the Kris Special at the Waystation, the netsuke room at LACMA, the Remington Rolling Block at the Backwoods Inn, the coffee shop at the LA Police Academy, the abandoned restaurant with leather walls at Union Station, the yardage of the Garment District, the abandoned fire station in the Toy District with the quartersawn oak lockers viewable through the crack in the door, the first two rows of lowrider history at the Pomona Auto Swap, Abe Lincoln's hat at the Huntington Library, the camellia forest of Descanso Garden, the bolt room of Roscoe Hardware that is hidden in a kitchen remodeling home center, the genius at the Museum of Jurassic Technology, the chile pepper booth at the Grand Central Market, sneaking to the top balcony of the Bradbury Building, the threadbare and dented Variety Arts Center, the orange groves of the 126 and the secret utility salvage yard in the northeast San Fernando Valley.

Ry and I share this Los Angeles and it was fun to show it to Lawrence. He did us proud. Los Angeles tries to throw itself away every day but we are still gold prospectors, hot rodders and guitarists. Our fundamental awesomeness will not be impinged.