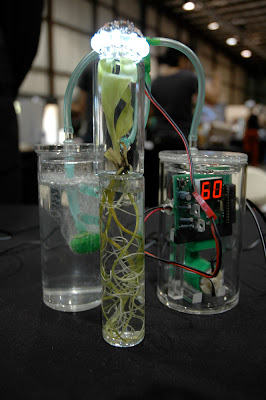 Phil Ross is a Maker's Maker

By most measures of handy, I am a reasonably capable fellow if only as defined by the number of my projects that have appeared in Make Magazine. My skills are not highly refined, but I am a snob about doing it myself and control the project scope by what I am able to accomplish. As a result, my machines shy away from coding software, engineering hardware, or machining parts out of a block of steel. The results are sometimes clumsy and rough around the edges, but they function as imagined and I make up for fineness of technique with aesthetic boldness. In art or hot rodding, I revel in the hand wrought elements and love to touch both the gloppy oil paint and the smooth finish of a hand-hammered aluminum fender. As an authenticity snob, the connection to the hand that crafted it means as much as the value of the object.

At Maker Faire, you can have a dozen epiphanies in a Saturday. Then Sunday comes and you can have dozen more. Dedicated individuals of similarly clumsy talents come together and point out what went right and what went less-than-right with their projects. As a stark comparison to professional life, where mistakes are hidden, the amateurs just roll their eyes and laugh as they tell you where they got it all wrong. The hardiest of laughter is reserved for those situations where personal injury was narrowly avoided due to dumb luck.

Smug in your DIY ethos, you meet Phil Ross, see his jaw dropping sculptures of nature captured, and feel the ground turn to quicksand as you realize you lost the plot. Epiphany #1 of 12, or an hour into Maker Faire.

To do Phil a grave disservice, I will paraphrase a bit about the content of his sculptures. As seen above, there is a plant that is being kept alive by the benevolence of a machine. Not thriving, just surviving, as light and air are meted out in increments sufficient to sustain life but not so great as to allow the plant to flourish. The LEDs and aquarium bubbler are controlled by timers, so who is the evil overlord? The computer? The software? Phil?

It is a great piece of art but the glory of what made it work so well, for me, was the exquisite presentation. All the glass is hand blown lab glass that was created to Phil's specifications, while the battery and electronics are housed in a perfect Lucite box. Phil didn't blow the glass and didn't build the box, but it is still all him. The outsourced components are but a trifle in construction. More effective for the elegance of presentation, it allows you to view the ideas and execution as if you were considering an immaculate mathematical or philosophical problem without the annoying reality of the physical world. The fact that the 'black box of control' is transparent makes for a sweetly complex problem.

So, am I building better stuff because I am doing it all myself, or should I reach to the edges and engage professionals to produce the limits of imagination? I'll do both, like Phil.

This language of handy, of making, of welding and woodworking, of mechanics and hand lettering, will tell stories that have never been told. 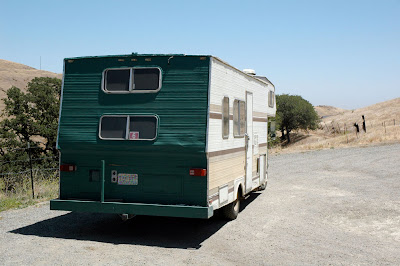 On the way home from the Bay Area Maker Faire, I stopped at a scenic spot for lunch amongst the live oaks, only to come across a stranded motorist in a multicolor motor home. He was on his way back from a model train show and asked me for a jump start. Though it was possible that all he needed was a jump, this simple query is usually code for "my car won't start and I have no idea why."

He was a very nice guy and generous with model train advice, even when you didn't ask a model train question. I commented on the asymmetrical paint on his motor home and he explained that midway through the job with a brush and a bucket of flat, forest green house paint, he had run out of paint. It still looked pretty good! Pretty good-ish, anyway. Good as a motor home could look that had been painted with a brush on three sides.

The problem was beyond a low battery and the solution was more complicated than a jump start. He kept saying, "Everything is original! Just like Dodge did it in the factory. All original."

With an original manufacturer's manual and a clear head, you should be able to fix many car problems on the side of the road, but the manual never specifies what is inside the mysterious clump of electrical tape under the dash. Or why the horn button turns on the hazard lights. I understand where he was coming from - if it is all original, it should follow some rules of logic. Vehicles that have survived a dozen roadside repairs may be champions of the interstate, but the only thing still original from the factory is the Dodge sticker on the valve cover.

"If I see something in the road, I will turn around to get it, even if it means I have drive a mile back to get it!" he said. A look inside his toolbox confirmed this random approach to tool acquisition as it included pipe wrenches, florescent light starters, ammunition for a 45 Auto and screwdrivers that had been used as pry bars, despite the warning against such use printed on the handle. 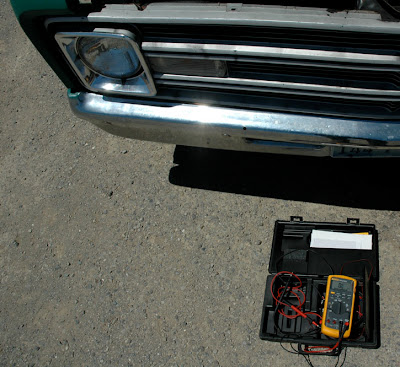 As I had brought a recently completed, yet to be thoroughly tested, contraption to Maker Faire, I had a full compliment of tools and a digital multimeter. Loath to be the one to further damage my new friend's motor home, I resisted taking the screwdriver from his hand and making the repairs myself. Instead, I gave him advice:

"Test the voltage from here to there, while you turn the key. What does it read?"

"Ok, now measure resistance, from here to over here."

Eventually, we found the issue - a bad prong in a decaying Molex plug to the ignition switch. We cut, crimped, bypassed and fired up the all-original Dodge with the only evidence of the event being another moderately kludgy repair sure to baffle the next roadside mechanic. "It's magic!" he said. "It is magic, that meter that found the problem. You are a magician. Where can I get one of those?"

I told him to watch the Harbor Freight sale flyer and buy the cheapest multimeter they have. I suspect he was overestimating the power of the magic box and will be in just as tight a pickle at the next breakdown, but the next guy to help him at the scenic overlook will be thrilled to find that meter in his toolbox of claw hammers and broken circuit breakers.

"I would give you some money, but I don't have any...” I explained that was fine, I just wanted to take some pictures to remember my lunch among the oaks and continuity problems.

As I was leaving, he flagged me down to give me an apple and an orange, which was deeply appreciated compensation. That's what we do at Maker's Faire. We perform magic, break the magic, rebuild the magic and give each other fresh fruit.

Phil Ross, I owe you an orange. 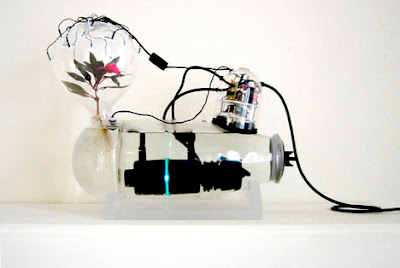 Juggernaut 2004
"I have drawn on two culturally divergent traditions for Juggernaut
- Chinese scholar's objects and Victorian glass conservatories,
which share the belief that nature is best understood
when seen through the lens of human artifice." - Phil Ross
Posted by Mister Jalopy at 3:27 PM