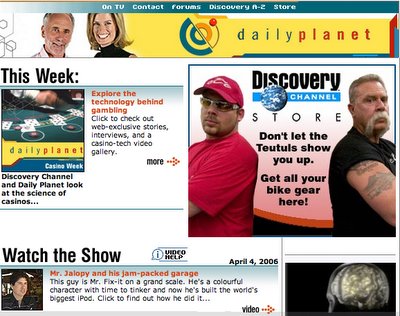 Less volatile and less moustache than the Orange County Choppers guys, but there I am on Discovery Channel Canada. I think producer Carol did a super job. The sound guy, JT, and I were talking about Jessco The Dancing Outlaw immediately prior to firing up the giant Ipod so, when the sweet sounds of old timey twang came from the mystery machine, I was moved to do a jig. Suffice to say, I was not expecting that I would be doing any dancing on television, but there I was. Dancing.

Daily Planet Homepage here. Video archive here. Any Hooptyriders know how to get the Daily Planet video viewer to work on a Mac? Seems even PCs have problems with the audio.
Posted by Mister Jalopy at 5:59 PM