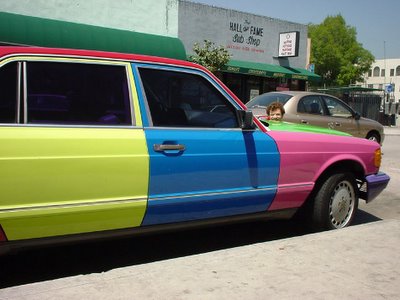 Responding to my query, eagle eye Coop reported that he had seen Dick Rude driving the Flea Multi-Mercedes. Sure enough, I dropped Mr. Rude an email and he responded with these photos.

"A few years back the car starred in an Abercrombie & Fitch advertising shot by Bruce Weber! Mostly it serves as a source of great joy to kids, an object of insult to others and a focal point for a lot of stupid questions. For me, it is just a reliable car that gets me around." - Dick Rude 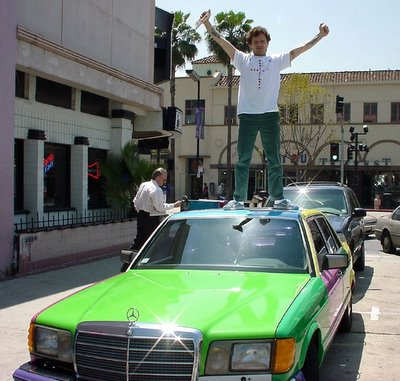 Talk about your punk rock provenance! There is no single color on this car that is acceptable except maybe the hood, which looks like a bright, new blade of grass. Somehow, in concert, all the colors look pretty damned good in that gumball machine sort of way. Dick reports that the clear coat is dissolving as we speak, but it looks like a very professional paint job. No brightwork was painted that shouldn't have been, the door trim was lovingly masked, and even the trim pieces under the headlights are a different color. Cool!

Hooptyrider Jason points us to the BMW sponsored art project. The above photo is a BMW by Calder but my favorite is by Stella. BMW must feel like they got their money's worth from Sandro Chia but the Holzer probably left them hesitant to open the checkbook again.
Posted by Mister Jalopy at 7:00 AM