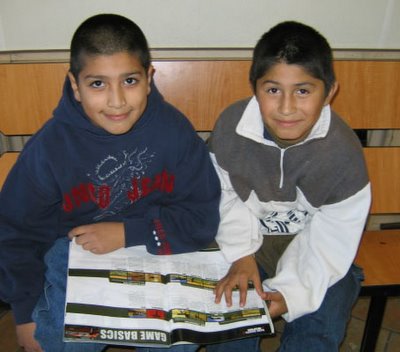 Less than a day after posting about Jose Luis Junior's insane, rabid desire for a PSP, the kind Hooptyreaders responded by opening their wallets to the tune of one PSP! When I went to present Junior's PSP, he was reading the previously mentioned Grand Theft Auto strategy guide with an equally morally bankrupt buddy. 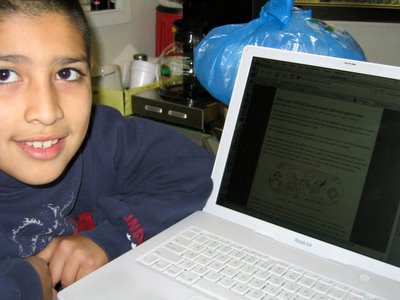 Accusations were made that I was running some sort of scam and it was even suggested that Junior was a scammer by starting his own blog rather than mowing lawns. Before Junior got his PSP, he didn't even know what a blog is. I am still not certain he understands blogging, but he sure liked seeing his hand drawn PSPs on a French gaming blog as seen in the above photograph. The cool dudes at idlethumbs pointed out that Junior has designed the most extreme game ever. 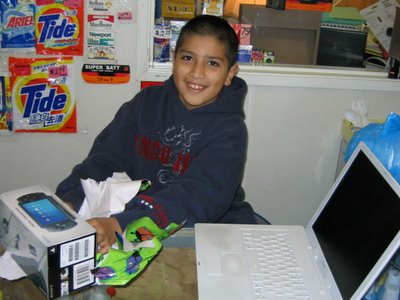 Honestly, I wasn't sure if Jose Luis would survive the excitement of getting the PSP. I really thought it was possible that he would just have some sort of freak-out fit, but he was cool. Before presenting the PSP, I spent a few minutes flipping through all the video game sites at a pace slow enough for him to see his PSP drawings but quick enough not to let him read that there was fund raising afoot. I explained that people all over the world dug his artwork so much, and were so blown away not only by the accurate renditions but also by his unbridled capitalism, that they each sent in a few bucks so that he could have a PSP. He was stunned. And thrilled. 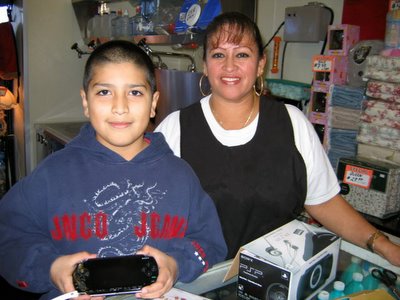 When Junior was unwrapping the PSP he said, "Where do the batteries go?" and then caught himself - he knew! He had drawn the battery door about fifty times! I explained to Raquel (his mom, on the right) the videogame rating system and that Grand Theft Auto is the videogame equivalent of a kill-murder-hooker movie.

Some people got it and some didn't. Apparently, being poor and uncommonly creative is not enough to merit reward. For those concerned that I got away with some sort of scam I assure you, I will never spearhead another collection unless I make friends with a third world kid with a fatal disease that wants a Nintendo DS.

Big thanks to all who donated! Big thanks to the kind videogame company employee who sent 8 games! Did I donate? Sort of. I covered the sales tax, the Paypal fees, and bought Junior PoPoLoCrois.
Posted by Mister Jalopy at 4:57 PM