Desk for sale! Plus, one more desk! Two desks!

As space is cleared at Hooptyrides, Incorporated, there will inevitably be some things that need to go. I want to keep all of the flavor of the old shop, while making it mine. With the quantity of top notch junk that I have, space needs to be made. Making the cut was a hundred junk distributors, but the desk is just not needed. 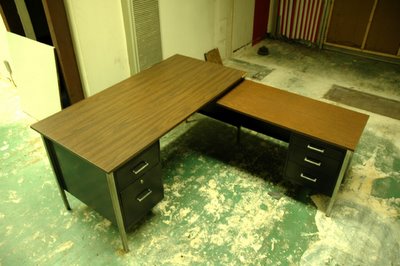 In the style of ebay hyperbole, please consider this exquisitely ordinary MID-CENTURY desk with matching return. The clean lines, square design, austerity, sharp edges of this desk will assure that snooty, but none too smart, guests may confuse it with the work of Charles (or Ray) Eames, George (or Howard, if it were a clock and not a desk) Nelson, Isamu Noguchi, RM Schindler, Frank Lloyd Wright, Ludwig Mies van der Rohe or any of the other oft-too-often-mentioned modernists of the MID-CENTURY. Relax… your friends deserve no better than a little chicanery! If it were not for the bold work of such modernists, would a desk of this plainness even be possible? Absolutely not! If it were not for the minimalist work of Phillip Johnson, would this desk have been acceptable even in a dowdy office? No, no no! It was the complete lack of ornament of MID-CENTURY that made desks like this commonplace, if not desirable. Makes me want a Campari and soda!

This desk is very well constructed. Very heavy. With return, for your IBM SELECTRIC typewriter, adding machine and a small desk lamp. Perhaps, if you are choosy, you could find the space for a copy stand. Some would damn this desk for it’s structural integrity as it nearly assures that this completely ordinary and unremarkable example of wood grain Formica will last longer than could possibly be desired. And, as this very mundane desk does not appear in any compendium of modern design, you can lie as to the maker and MID-CENTURY provenance without any of that annoying concern of being caught. 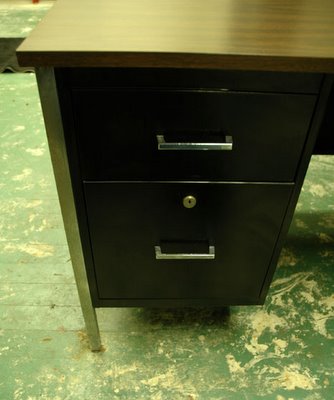 If it were not for the rigid aesthetics of the MID-CENTURY, a desk like this might have a carved wood squirrel. Or lions paw feet. A leather inset top with gilt edge. Perhaps an acorn motif with maple leaves. It might have been a light colored, soft wood, with a richer, darker colored stain that is reminiscent of a more luxurious (and expensive) hard wood, which would be sure to disappoint when an errant chip reveals the truth… With this completely ordinary desk, there are no such assumptions as only a hayseed yokel chump would believe that the dark Formica was anything but a plastic veneer covering common particle board. Chips, already in place, leave nothing to the imagination, as it is what it is. Now, what is more MID-CENTURY, Ikea that fools the buyer with wood-like veneers so close to actual wood that it may even impress your mother in law, or something so obviously synthetic that even 4 year olds know it is a piece of shit? Isn’t the later more honest and, therefore, more modern and, therefore, more MID-CENTURY? This completely unassuming and pedestrian desk is MORE MID-CENTURY than Ikea! Put that in Charles Eames’ pipe and smoke it! 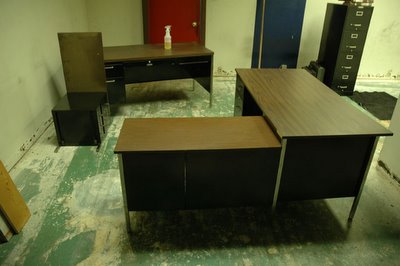 Design within reach? Pshaw! This very plain desk is design within pocket! It is practically design within mouth. Not much to recommend it, but this desk can be yours for no more than $30. And is that a second desk? A mate? A matched set? It sure is! Generally, a bookend collection like this would command more money, but we are offering both for less! $50 for the pair! Loading assistance is available but delivery is not. Conveniently located in the Silverlake area of Los Angeles, we urge you buy these desks immediately!