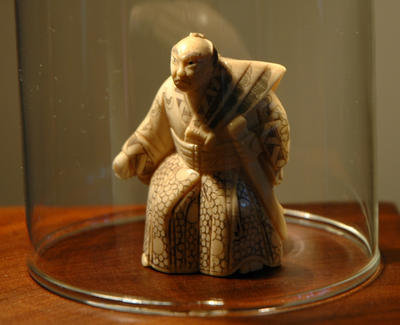 You can put a bottlecap, used teabag, spider eggs, a piece of Bazooka or the Bat Phone under a glass dome and it immediately ups the ante. Stop toiling, people! Your art stinks! Glass dome it and move on! 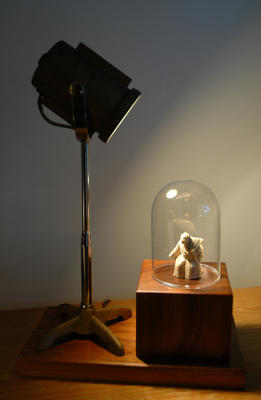 The garage sale purveyor said that it was some sort of obscure director's award. Maybe a cinematographer's award. The garage sale matron really had no idea and was just making stuff up. She believed her own bullshit, as they often do. I blame the early rising, lack of coffee and excessive sun exposure. Since I garage sale every week, I don't lose my shit when I have a garage sale. I am carved of wood. Practically an Olympian of garage sales.

Anyway, none of that means a hill of beans. I probably have twenty lamps but I don't have a finer lamp than this at double the cost. I mean, Hooptyrides Garage has not a single Lalique, Tiffany, Steuben or Pairpoint lamp, but we do ok. No Dirk Van Erp, but we get by. No Roycroft, but we aren't sitting in the dark either.
Posted by Mister Jalopy at 5:44 PM