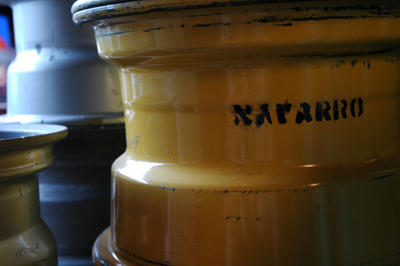 Recently, I went to an auction to shutdown the majority of Navarro Engineering. Barney Navarro is staying in the hot rod parts business for his flathead head and intakes, but the machine shop was sold and I couldn't miss it. If given the chance, I would have bought the entire shop and left it exactly as it was but these things can't stay as they are. With the exception of a single paperweight flathead that had been ported until there were big holes into the water jacket, there were not a lot of hard car parts. Save the Rambler 6. 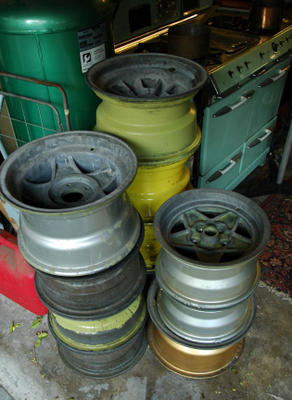 I bought the stack of wheels. All magnesium, most knock-off style. The set of yellow wheels were on Barney's Indy entry. One of those wheels is marked Ferrari. Who knows how Barney ended up with one Ferrari Grand Prix knock-off magnesium wheel, but there it is. So, I guess I have to build a race car. 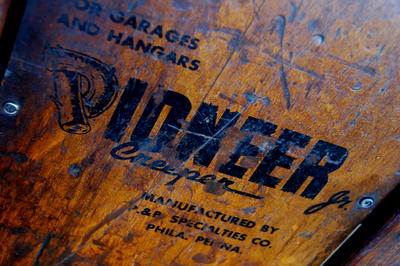 Barney Navarro's creeper has done more, seen more and been under more race cars than I will ever dream about. People at the auction were surprised that I bid up to an astonishing $50 for this beat old creeper, but I figure it is the ultimate hot rod good luck charm. 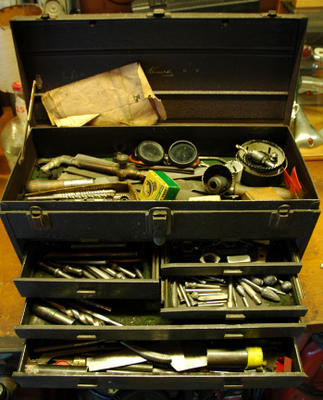 The fellas at the auction were also surprised that I paid about $100 for this toolbox. They asked, 'What was inside?!'

True, a brand new Kennedy machinst box would cost less than I paid for this one, but this is a time capsule. This is a glimpse into the era of the dry lakes racing heros, to a time when an Indy car based on a stock, cast iron Rambler engine could be built in a 2000 sq ft Los Angeles garage. This tool box should be in the Smithsonian. Unless you come across Vic Edelbrock Sr.'s or Alex Xydias toolbox, I don't know that you could find a better box. I would have paid $100 for that 60 year old Victor torch and welding goggles that are sitting in the top. Though I could not buy the entire Navarro shop, I will never add or subtract anything from this toolbox.

What was inside? The history of hot rodding.

Posted by Mister Jalopy at 6:51 PM