1930 State of the Art for Proletariats 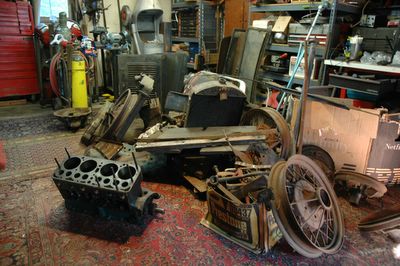 The garage was completely cleaned up and then the next (and last) load of parts arrived. Each individual item warrants extreme focused attention.

When I concurrently owned a 1954 and a 1964 Chevy, it was fascinating to look at the differences between the two as Chevrolet solved problems and cheapened components. The 54 Chevy had but a lick of plastic, while the 64 Chevelle was laden with the miracle of plastic. Despite a downturn in materials and workmanship, the engineering leaps were astonishing. To compare a stovebolt 6 to a small block Chevy was a dazzling paradigm shift in technology. That 10 years represented dramatic changes. Not since then has there been a decade that has seen such movement.

Automobile designers have always been confronted with the same issues and how they solve those issues is fascinating. Saab with the backward engines, Citreon with the freaky self-leveling suspension, VW and their air cooled miracles, Porsche with viscuous coupling 4 wheel drive, Mazda with the Wankel rotary, Mercedes decades diesel dedication and even the steam power of Stanley. Everybody had a different idea of how to reliably power an automobile, to get around a corner with most of the wheels on the ground and how to do it so that it will still do it tomorrow.
Posted by Mister Jalopy at 9:50 PM