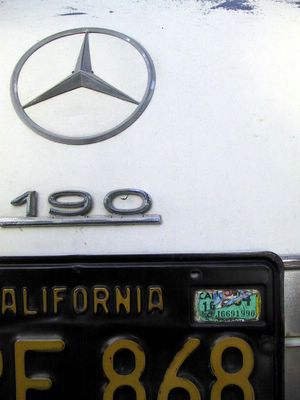 The 1961 Mercedes 190b had not run since 1984. With the exception of a single hair-raising ride around the block, today was the first day that the Mercedes was seriously put to the test. I did not get a photo of the Mercedes 190b at the gas station as I was too busy mopping up the giant puddle of gasoline under the car. It appears that in addition to needing a new fan belt, there is also an issue with the flexible hose connecting the filler neck to the tank.

Rather than focus on the length of time that it takes Hooptyrides to complete a project, instead we should direct our attention to the staggering number of projects juggled at any moment. Today, though it appears it was all bowler hat Mercedes related, I actually worked on - and drove - three automobiles.
Posted by Mister Jalopy at 10:03 PM