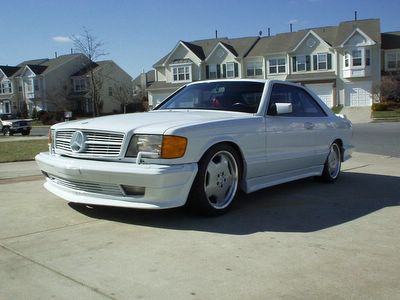 This 560 SEC is not an AMG Hammer. The ebay seller says it is a Hammer, but it isn't. The Hammers were based on the 300 W124 bodystyle like my beloved turbo diesel station wagon. Though my wagon and the Hammer share certain similar exterior characteristics, there is absolutely no overlap in performance.

AMG practically invented 'eurostyle' in the 80s. The whole 'white out' approach of painting everything that could be painted and tacking on air dams became the new standard in car design. When was the last time you saw a new car with a contrasting color bumper? Or, gasp, a chrome bumper?

This is a Mercedes 560 SEC, not a W124. The seller also says this car was not created by a tuner, but AMG and Renntech were both tuners at the time (in 1999, AMG has became part of DaimlerChrysler.) But these are nitpicks and do not pay this car its due. The ebay ad is more entertaining and informative than an entire issue of European Car magazine. The highpoint of the ad is the invoice. A sample line item:

Labor to Remove, Crate, Ship and Replace Interior
To and From California $2000

The invoice total is a mind boggling $202,370.70. You'd think they would have rounded it down to an even $202,370. A true 'spare no expense' project. I would love to see the entire invoice. $700 for window tinting and 2 hours for mounting and balancing the tires seem a little excessive, but I am not accustomed to high-end work.

If Mercedes can be accused of over engineering, then AMG is practically criminal. The DOHC AMG heads are notoriously problematic and no wonder. Retrofitting an engine with double the cams? It's like a modern Ardun. No wonder Renntech reverted back to the SOHC heads. Not a cheap retrofit, but when you are already in for $200k, what is another $20K?

So, it is an absolute period piece, it is way ahead of it's time, the documentation and provenence seem solid, the performance is amazing and it has been fastidiously maintained. So, why am I not buying it? First of all, it's white. Second of all, it is the single most gold package automobile on earth - even though it is without the actual gold package. This thing looks ridiculous! This car screams, 'I snort my coke off a glass coffee table!' Its the Patrick Nagel of automobiles. This thing is more black lacquer than black lacquer.
Posted by Mister Jalopy at 6:47 PM