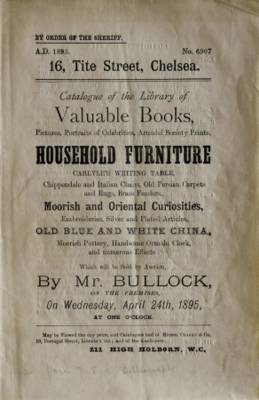 In case you ever mistakenly think for a moment that you are clever, turn to Oscar Wilde and you will remember what timeless means.

Among the ephemera for sale at the Sotheby's Oscar Wilde auction, is this remarkable auction catalog from Wilde's bankruptcy auction. Not surprisingly, there are only four known catalog copies, as they make no mention of Wilde, were printed in limited quantity and were certainly discarded years ago.

At an estimated 30,000-40,000 pounds, it is an expensive item but it would sure be nice to have aboard the bookmobile. Perhaps a pot-belly stove in the periodical corner and this death bed photo of Oscar Wilde hung in a place of respect. At 3 by 4 inches, it could be hung in a small alcove. A tiny place of great respect. Though it is not in Barlett's or the Oxford Dictionary of Quotations, Oscar Wilde is often credited with the final words, 'Either the wallpaper goes or I do.' The death bed photo does nothing to confirm or the deny the wallpaper's merits.

The Sotheby's catalog is informative and heartbreaking, a story very well told - "Nothing could more vividly illustrate the pathos of Wilde's situation during the disastrous month of April 1895..."

Posted by Mister Jalopy at 9:53 PM