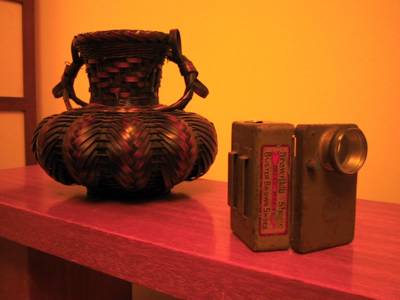 Its a hell of an ikebana basket, but lets focus on that oddball flashlight. The BrownBilt Shoes 'Tread Straight' Buster Brown Shoes mystery light is marked Germany and Triola, but I can find no online mention of such a device. It was purchased for .50 cents this last weekend. The knob to the left of the porthole engages a blue lens filter; the right, a red filter. The Buster Brown took a pair of D size batteries and, as you can see, it had metal belt straps on the back, but to what end? Was this some sort of belt bike light? Hang it off your ass and flip on the red filter for slow as it goes, blue filter for reverse?

The Buster Brown light was not salvagable as the battery acid soaked cardboard interior was missing parts. And I knew damn well when I bought Buster Brown that it was a disaster, but the quality of manufacture was so high and the switching lens system so ingenuous, I bought it with no idea what I was going to do with it. While removing all the guts and trying to decide if it was worth rebuilding from scratch, I realized it was really close to ipod size.

Posted by Mister Jalopy at 1:07 AM